Liverpool Sound City is now in full flow and following on from Keith Goldhangers’ day one review we have some more words about many of the bands seen during day two.

Kick-off time for Saturday is 12:45PM, although it’s not. We haven’t worked out that the time on our scrap of paper is wrong. No big deal, we’ll walk around and familiarise ourselves with the venues and locations, wander into Constellation gardens and nod politely to the tunes of local band CAVEPARTY.

TEAM PICTURE are the band we’ve left our early morning jacuzzi for and provide us with a bunch of new tunes, excluding not only the best ones from their début album released last year but also the uniforms too. This band we hoped would be ripping up venues by now, jumping around, having a party, making us giddy with excitement and having us all waving our arms in the air. It’s a modest performance by the six-piece and one that reminds us of the first time we crossed paths and how we finally realised why were in the same room once we heard the tunes back in the comfort of our own homes.

Over at District the venue is packed for another local band we don’t know the name of or even care much about after a couple of songs. Timings seem a bit inconsistent with the soon-to-be-discarded tattered piece of paper and the app that worked so well earlier but doesn’t seem to be helping much at the moment. We wander into a couple of other venues and then straight out as four Swedish women are playing ridiculously loud rock music whilst waving their hair around, youngsters are attempting Prince cover versions under a Gazebo, a dude in a hoodie is singing about ‘crack heads in the supermarket ducking and (a)diving’, and people old enough to know better are on what could be their third pint of the day already whilst unsuccessfully asking the few people standing around with their hands in their pockets to put them up in the air. 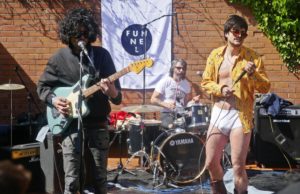 itself from the lead. It’s a real Frank Spencer moment. The app on our phone springs back into life and whilst we tap away trying to find a name to put to this act (and venue), this chap has perched himself on top of a shed at the rear of Brick Street Garden, picked a fight with the sound man and left the singing to the remaining members of the band of Spanish garage rock musicians known to the promoters as LOS WILDS who have a couple of songs that go Yeah! Yeah! and a couple that go Whoah! Whoah! We decide these songs would probably sound better if the same chap would put his shirt and trousers back on, or at least got a better fitting pair of underpants.

A visit is made to what we’ll call a main stage situated between a couple of warehouses in New Bird Street to have a look at a band we’ve not heard before called JUST MUSTARD. Before entering this area we’re made to walk through a maze of metal barriers, take off our hats, get frisked a couple of times and have one of those handheld metal detectors waved over our nether regions. Once in, we realise that any toilets are located outside this area and we’ll have to go through it all again with the same people to get back in. Just Mustard are very decent, and any early concern regarding the name of the band and the sight of a frontwoman who basically just looks a bit pissed off to be there, are soon brushed aside as they win us over by the end. LIFE (right) are next and we are now where we belong: back amongst the cream 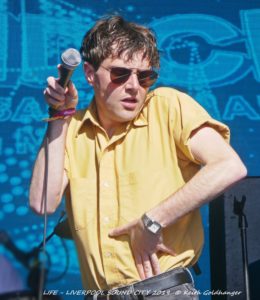 of the crop, the catchy choruses, the sound of 2019 all provided by one of our favourite pop stars and his brother, a new cool bassist and the same drummer they’ve had since we first crossed paths many years ago. So many years ago that Mez’s child may not have even been born at that time of our lives when the band appeared in East London in front of about twelve people. Today they have a child minder amongst the team and they’re still getting better and better every time we see them. This is one of the many performances that we’ll be mentioning when looking back on all of this one day. A truly terrific live show that highlights a few tunes from their soon-to-be-released second album, and tunes that equal the tunes from the 2017 début album Popular Music. Life are always a band one can rely on and today was no different.

SHAME  (top) are even better and are equally as magnificent to watch. The cheers and laughter when they reveal a milkshake-stained bloke not even known to his mother as Tommy Robinson as a backdrop is priceless. But after three or four songs we’re gone because we’ve now seen Shame loads of times and on the other side of one of the adjacent outside walls are a band from Norway called POM POKO (below) who we need to see again. Their performance earlier in the year back in East London was so good that, despite the knowledge that a second show later on this evening was also scheduled, we just couldn’t wait that long. Boasting a superb drummer, a superb bassist, guitarist and energetic bouncing lead singer with a name we can’t pronounce, for half an hour Pom Poko were the best band in the world, just as they were last time we stood in front of them. It’s like we’re watching a hardcore punk rock jazz band with a collection of old AC Temple and Sonic Youth albums by their side, speeded up, ripped apart, 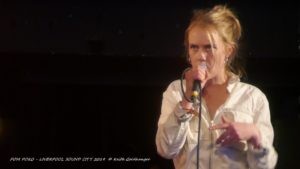 slightly unhinged and very clever, very exciting and yet still quite accessible amongst today’s feet tapping classics available on all good radio stations. Shame are still playing once we leave the venue to catch our breath. One of us needs a lie down or a bag of crisps, we need to find one more venue and we need to make sure the bands we still plan to see today are still playing on time.

They’re not, but this works in our favour as we get to not only see a band we know nothing about called INDIGO LO, who definitely have a tune or three to investigate at a later date but cause us to argue amongst ourselves as to whether the bass player is an old friend from YIPOK who one of us wrote about a few times a couple of years ago (it was).

We’re in a venue that is immediately adjacent to a bar where a couple of hundred people are getting wasted on alcopops whilst dancing in a non-ironic fashion to, amongst other terrible things, Rod Stewart tunes. Its a bizarre experience walking from this room to one where HUSKY LOOPS are soundchecking by performing Radioheads’ National Anthem for the early arrivals, then going on to play us a set of songs that is something quite unique. There’s so much bottom end coming from the bass player that, along with the simple hip hop beats from the drummer, make them possibly the worlds first dub step indie band. Fucked up guitars that squeal and screech, a vocal that gets processed, de-tuned and looped and a performance that challenges the listener to conclude that there really isn’t anything you can compare this too even though it’s simple, precise and foot tapping brilliant.

Shortly after this we’re back across the one busy road (the crossing we recommended in last years Sound City review is nearly complete, of course we don’t claim responsibility but would like to think we did our part), finding shows we can sit down to watch: Italians playing pianos, followed by dreadful rock bands that no one else apart from other bands’ lonely drummers (and Louder Than War writers) are watching, Korean bands that seem to be singing their own version of I Wanna Be Your Dog and local bands we certainly don’t understand but will investigate later in our lives because any band that can have at least half a dozen people singing along and getting pissed to are never to be ignored.

It wasn’t planned this way but we decide on ending the night after witnessing what we’ve decided to see via to the magical old fashioned way of finding new bands – word of mouth.

OCTOBER DRIFT then … stupidly, ridiculously brilliant. This is a band that play mid paced Joy Division/Editors music but behave as though they’re playing them ten times faster than they actually are. One gets dizzy watching this fabulously exciting four-piece who boast a front man that is up on the bar by the second song and flying through their repertoire as though they’ve either just found a stash of speed under someone’s front door mat or realise they have to get the last bus home in three minutes. There can’t be a band that have ever been so manic to witness in terms of body language whilst playing songs like these surely? They won’t be doing this by the time they’re in their 40’s one suspects, and we imagine they may have running machines in their bedrooms that they work out on every three hours of the waking day. Brilliant to watch, lovely to listen to and a band who will be responsible for making people cry their eyes out at some point during their lives. There’s no way we could even contemplate trying for one more show after this, everyone needs a headline band to end the night and quitting the day after watching one of the most raucous bands with great songs to complement the spectacle is the most respectable way to end what has been another fabulously exciting day out at Sound City.

Day One review can be found here and Part Three here.

Song of the weekend.