Liverpool Sound City 2018 was like preparing for The Eurovision Song contest before heading towards the bookies. There are so many bands from heaven knows where doing so many bonkers things to trawl through. Some of it is great, some of it sounds not so great.

Most of it is great though and today we realise we may be able to catch a bit more now the area known locally as The Baltic Triangle is more familiar to us.
Today the great get seen, the not so great swerved and in one case we decide to visit an artist purely for the fact that what we’ve witnessed on the ‘net whilst digging deep leading up to this years festival simply has to be seen in the flesh.
More about this later.

SEA GIRLS are opening proceedings over at The Blade factory. Its a lot darker than day one 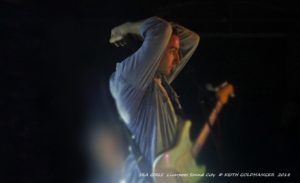 inside this room.
Darker as in you can’t see anything as you walk in.
Its a bit chilly and why we are here in the middle of the hottest day of the year is something we begin to ask ourselves just as the band manage the only stage entrance any band gets in this building all weekend. There a small but modest crowd ready for this. As small cheer goes up and we realise this is another band with a few more people in the know than we are (almost carrying on after the night before but not quite). Another band on the road to great things we imagine. Young (mainly female) fans are wearing the bands merchandise and singing along to some happy, heavy, guitar pop, indie anthems of which we hear plenty of over these two days.

VIOLET YOUTH are an enjoyable dreamy indie pop band and electronic trio LAMINATED PET ANIMAL seemed to ploughing a bit too much into their own dreamy electronica than is necessary but enjoyable nevertheless.

ZULU ZULU are Majorcan, wear masks and have a man dressed as a chicken with some badly 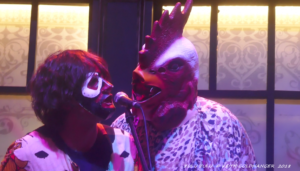 designed seventies curtains wrapped around him who joins in for the last two songs. The band are fabulous and sound a bit like Animal Collective. It’s the African Rhythms that will become very popular once they get to appear on the open air stages. We’re thinking WOMAD as opposed to Donnington. This performance was one of many highlights over the weekend.

GOD ON MY RIGHT inside the even colder downstairs department of the Blade Factory are performing their polite dreamy electronic reverb heavy set of songs that we’re now listening to in the comfort of our homes whilst upstairs ARTIFICIAL PLEASURE prepare for the keen amongst us that want to hear something a bit like Talking Heads. It’s more like early 80’s disco Bowie but those wearing their dancing shoes won’t care about this as much as the band will when they get reminded of it for the next few months whenever anyone at a keyboard is writing about them. Each tune a gem. An album due this week that one feels may contain a few tracks the world are going to love but won’t be able to mention without naming the man who once wrote Joe the Lion and instructed us to put on some red shoes before dancing to the blues. 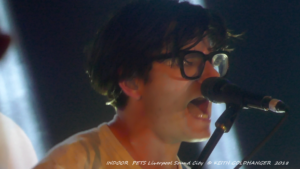 it’s the same band playing the same catchy infectious pop tunes that attract a decent afternoon crowd that will be swelling in size as the months go by. They’ll be doing reunion tours with The Magic Gang in 25 years time. 2018 Indie by definition.

MART AVI is the oddest thing we’ve come across for a while. If It was allowable to mention the Eurovison Song contest again (well not again actually, it’s what was being referred to at the top of this page) then here we’d have our eye catching act you can’t believe you’re watching.
Watching a man in a cold, white room singing along to his laptop in a long black mac, blowing a whistle, leaning against the wall at the back or walking dangerously close to those of us who want to look and listen but maybe not as close as we are is an odd thing to witness. This chap has a few award winning albums back in Tallinn that may be as valuable as that 100M swimming medal (won because when no one else turned up) in 1972 achieved by he who will not be named. We’ll leave this astonishing video here for you to make your own mind up about. Kudos if you can watch this a third time. One of those videos that could go viral if placed into wrong hands.
The Eurovision Song Contest will not be mentioned again.

THE NINTH WAVE are not such an odd bunch but they do have us asking questions time may eventually answer. The Glasgow bands’ recent recorded output sounds impressive. A bit Goth but it’s not exciting enough to be Marilyn Manson and not what we hoped for. We’re ignoring this blip (we’re not at all actually). What we heard tonight was basically a standard rock band 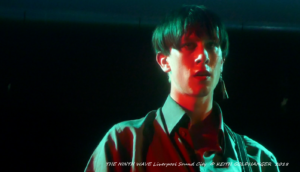 with dual male/female vocals, known in the mid 80’s as being a like The March Violets.
Not as thrilling as we expected whilst listening to them during the build up to this at home and as the front man ends the set shirtless and donning a big pair of rubber gloves we realise there’s a fine line between an  uplifting band that remind us of Editors and a female fronted rock band that are ten a penny in and around the pubs in the UK. The bass players vocals were more prominent than the lead tonight and that’s what we’re blaming all this on. The Ninth Wave are one of those bands that we may look at in a couple of years time and punch the air to though. 2018’s New Kind of Ego and most recent tune and Swallow Me sound promising. Last years Reformation is a decent tune too therefore we may come back to them if they continue along the same path of progression.

SUNSET SONS are a piano lead rock band, loved by many who all seemed to know the words to everything they do and sound a bit like like Slow Reader Club who we saw yesterday but with a piano.

We’re in the room for SUPERORGANISM though and wonder where this road going to lead with this band.
The story so far is so good.
Mass adoration without having any of that turning up in a pub on a Wednesday night to play in front of four people nonsense. There will become a time when they’ll have to give us a bit more than what we have at the moment though. The songs are beginning to sound a bit more rushed a year or so after first being introduced to the incredible Something for your Mind. Front woman Orono has gone from being a timid figure standing on the spot and mumbling the words, to larking around more, grabbing audience members phones to sing the hits into for what will be a great bit of footage we hope for the owner at the front. There’s no denying the talent of these people though. When it hits again it may hit us like it did last year. Maybe they just get pissed before every show now and shouldn’t.
Time for some new tunes though please one of us is heard saying.

So what have we achieved this weekend then apart from empty wallets and aching livers? New bands to catch up with and see again if the impressive reactions they are getting in their current situation continue. Songs we will soon become obsessed with. Bands that may be forgotten about for a while or forever but memories that make up this big world of music some of us have been fortunate enough to have witnessed, not just in 2018 but as part of a long history of events some of us have been attending since we left school, got jobs decided that we like standing in rooms watching what other people want to show us and tapping our feet furiously.

Liverpool Sound City was incredible again. Of course we all missed some bands we wanted to see, sometimes for a second third or twelfth time as it may be with Asylums. This meant we got to see a few young bands still eager and wise enough to know that playing in front of less than fifty people is OK. It’s a start for them and for us it’s also a welcome introduction.
It may mean we’ll go for the play button every time a new tune is ready to be revealed in the future. We’ll probably turn up again in front of these bands, tapping the individuals on the shoulders and confirming with them that what they’re doing with their lives is hugely appreciated.

out at the end of it all. The people who will learn how to improve things for future events and be content in the knowledge that they’ve been responsible for many peoples memories that a weekend such as this will contribute to. A small piece of what could be a long story for some individuals involved in these bands.

Liverpool Sound City wasn’t rubbish at all then. It was simply another occasion to witness some very good new artists that we need to be aware of and to catch up with some more established bands that are beginning to step their game up and react to the adoration they’ve managed to achieve so far.
We saw loads, we missed even more. We’ll keep the schedule in the bottom drawer and in another couple of years probably ask ourselves how we managed to miss the beginning of someones bright future or why some of our favourites are no more.

Here’s a playlist of many of the bands referred to above. Most of these were acts unknown to many of us before Sound City 2018. Only time will tell if we made correct decisions during the weekend or whether some other act we missed will go on to achieve the Douze poi later in life. We think we made the right decisions this weekend however we’re sure there were many other people who also believe they made correct decisions too.

Thank you Liverpool – same again next year but with a Zebra crossing please.

All words and photos by Keith Goldhanger. More writing by Keith on Louder Than War can be found at his author’s archive. You can also find Keith on Facebook and Twitter (@HIDEOUSWHEELINV). You may subscribe to the Goldhanger Shorts Facebook page or browse some of his photos too if you so wish.