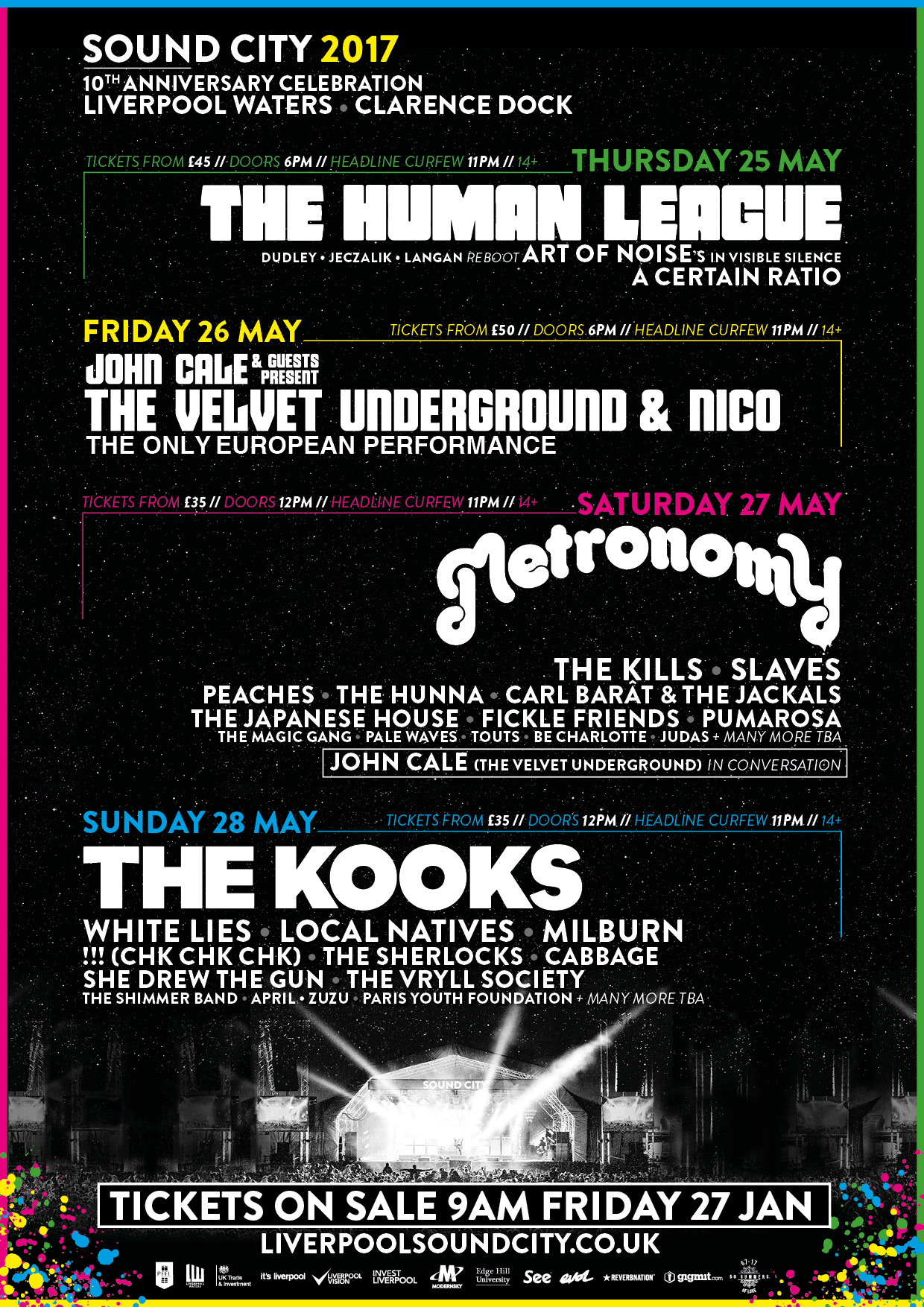 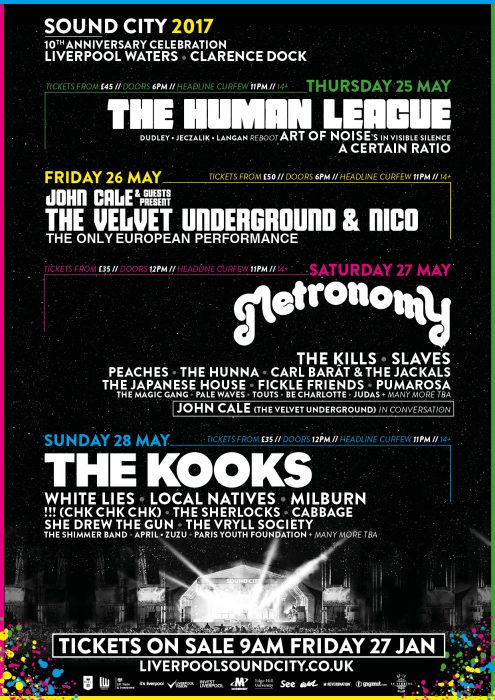 2017 is Liverpool Sound City’s most enterprising year to date as the festival pulls out all the stops in celebration of its tenth anniversary.

Moving to the larger venue of Liverpool’s Clarence Dock and boasting a line-up that features this year’s only European performance of ‘John Cale presents The Velvet Underground and Nico’, this year’s Sound City is an event that promises to delight the senses more than ever.

You can always rely on Liverpool Sound City to deliver an impressive line-up, with some of the biggest names in alternative music from The Flaming Lips to Dexy’s Midnight Runners having topped the bill in previous years at what is now one of the largest urban festivals in the UK. Despite its reputation for blessing us all with blinding line-ups however, fans were promised an even bigger and better festival in 2017 as Liverpool’s Sound City celebrates it’s tenth year of upholding the city’s musical heritage.

Sound City has vastly increased in size and popularity in the ten years since its initial inception, with 2015 marking the event’s graduation to fully-fledged festival, as it moved from its original home in the heart of Liverpool’s City Centre to Bramley-Moore Dock. In its birthday year however, it seems that Sound City has outgrown its home yet again, with festival organisers recently announcing a move to the even larger waterfront venue of Clarence Dock, making room for even more artists, more fans and more debauchery. In addition to this pleasing news, the organisers well and truly smashed it out the park when they released the squeal-inducing lineup for this years proceedings, with The Human League, John Cale, Metronomy and The Kooks topping the bill across Sound-City’s four-day festival.

It’s not only Liverpool Sound-City celebrating a milestone this year however, as 2017 also marks the 10th anniversary of The Kooks’ debut studio album ‘Inside In/ Inside Out’, whilst Friday evening will see this year’s only European performance (yep – I know) of ‘John Cale Presents The Velvet Underground & Nico’ as the seminal album turns 50. Cale’s 2016 performance in Paris saw him joined onstage by  The Libertines, Animal Collective and Mark Lanegan, and though no extra guests have been announced yet for Sound City, it’s more than likely that fans will be treat to one or two special appearances.

Liverpool Sound City’s bill this year really is belting, and there are so many absolute gems that it hardly seems fair not to mention all of them – BUT- I will do my best to be selective, so here goes;

The theme of milestones continues as iconic indie duo The Kills make an appearance as part of their 15th anniversary celebrations, whilst Saturday also features performances from Carl Barat & The Jackals, Louder than War favourites Slaves, and  Peaches who will probably show up with her dancing vaginas in tow. Highlights of Sunday’s line-up include Sheffield heroes Milburn who reformed last year and played sold out gigs all over the North, riot-inducing Mancunian post-punks Cabbage, and Marling-esque She Drew the Gun, who won Glastonbury’s emerging talent competition in 2016.

Despite the frequency of eye-grabbing names on this year’s bill however, Sound-City is a festival that cherishes its beginnings, and the true beauty of the festival is in its continuing support of new music and up-and-coming bands. Names not to be missed this year include Sheffield-based indie fourpiece The Sherlocks, self-proclaimed ‘Geek-Rock’ outfit The Magic Gang, The Shimmer Band & April, who will join Cabbage on their February tour, and local lads The Vryll Society.

Basically, Liverpool Sound City is having a fucking massive birthday party and we’re all invited.

This years festival takes place at Liverpool’s Clarence Dock from 25-28 May 2017. Tickets are on sale now on the official Liverpool Sound City website, so I’d suggest snapping ‘em up quick-smart if you’re planning on attending.

All words by Abi Small. For more of Abi’s writing visit her author profile.