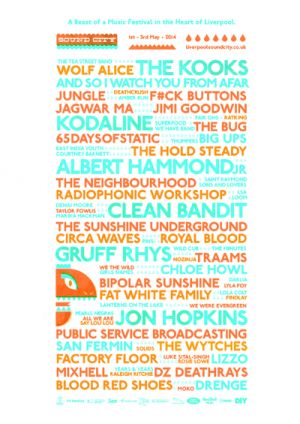 It’s here again … Sound City. For Louder Than War, Keith Goldhanger, who’ll be part of a large Louder Than War contingent headed up to Liverpool on Thursday, previews.

Location of one of our favourite weekends in 2013 where some of us, well…one of us, had no plan, no idea where he was going, queued up outside the wrong venues to see the wrong bands and left eternally greatful and content in the knowledge that people involved in the organisation of the event and those involved with the plucking of strings, pressing of buttons and singing their lungs out actually did have their acts together a lot better than at least one of the enthusiastic punters.

My personal favourite moments were many.

So what are we looking forwards to this year then ? Well….bloody hell…. the anticipation the week before we head north this week is something we used to experience just before a weekend at Glastonbury (if that’s the yard stick you’d like us to use) but even that was clouded by the possibility of …well, clouds full of water and mud under our weary feet.

No tents and no weather problems to worry about in Liverpool though so fix up and anticipate …..

Factory Floor, East India Youth, Fuck Buttons, and FAT WHITE FAMILY
…….Yes folks , without wanting to just show you pages of old Louder Than War Articles for you to sit around and read it goes without saying that most of our favourites we’ve covered in Louder Than War are turning up here.

…The list is endless, I could go on and on and on but there’s also the anticipation of seeing some of our favourite artists that we’ve not yet had the pleasure of standing in a room with yet.. Josh Record at the Cathedral is promising to be a sublime early evening pleasure, and ditto, another peep at Electronic pop duo Crystal Bats whose recent “Falling in Love” has been blasting out of the speakers before heading out for the Saturday night Disco’s we sometimes find ourselves in.

Will clashes in our schedule allow us a look at the sublime Woman’s Hour or will we still be trapped inside a room we casually walked into hours previously, unable to escape yet another new listening pleasure we hadn’t expected?

…I could go on for hours, and next weekend we probably all will.

Liverpool, are you ready yet?

Louder than war’s own John Robb will be floating around taking part in a couple of the panels and interviewing some of our favourite artists. There’ll be others taking mental notes to pass over to you all and there’ll be at least one of us continuously tossing a coin and saying out loud with gritted teeth (Heads, Slaves ……… tails, Fat White Family…. best out of five…….seven….nine ….)”

Are you ready Liverpool?

We’re coming to your party again and can’t bloody wait.

Advance Tickets are on sale now – Liverpool Sound City is run completely on a wristband model. This means there are no individual show tickets. No wristband no entry. A range of tickets are available from the Sound City Ticket Office.

Liverpool Sound City can be found online here: @liverpoolsoundcity.co.uk. Find them also on Facebook and their twitter goes by the handle @SoundCity.