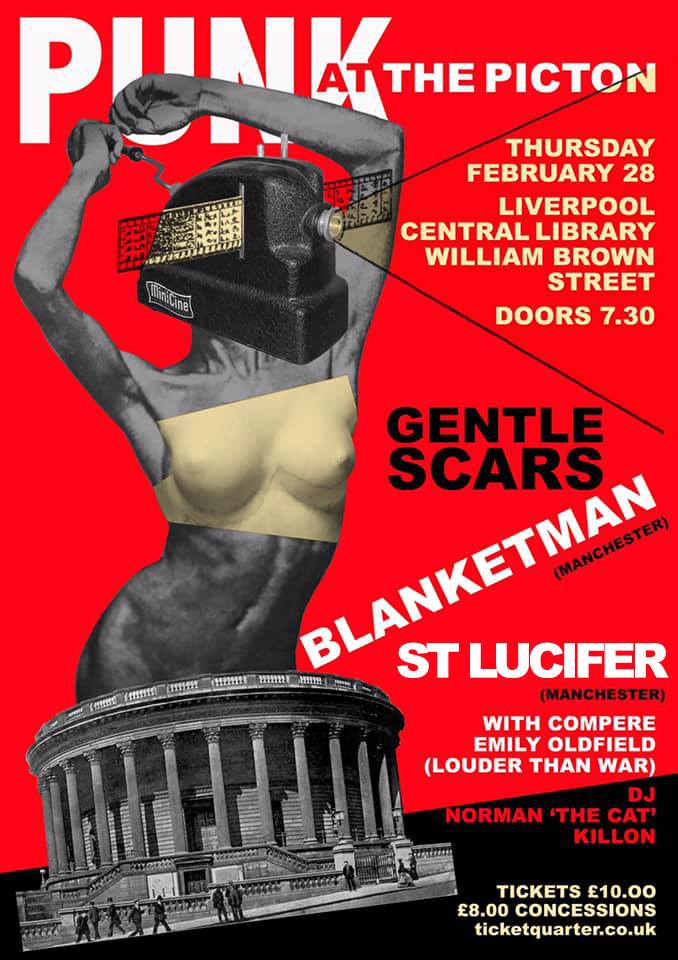 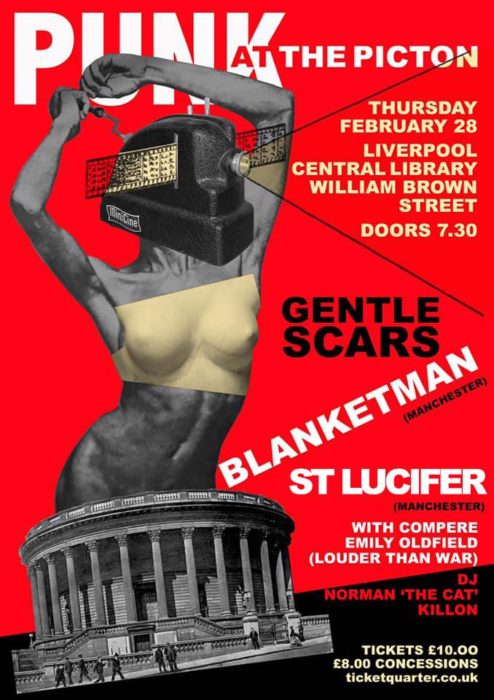 No need for quiet in the library, as a unique punk gig is coming to Liverpool Central Library on Thursday 28 February- featuring Liverpool’s own The Gentle Scars, as well as Blanketman and St Lucifer from Manchester.

It certainly is a striking way to mark the closing of the ‘Punk at the Picton’ exhibition at the venue, with The Gentle Scars set to headline; a band with bristling sound and a serious backstory. For example, they include Martin Dempsey on bass, who was formerly of early local punk band Albert Dock who supported the Sex Pistols in their one and only gig at Eric’s, Liverpool. Expect a raw, gripping sound and plenty of stage presence – they were previously part of a Louder Than War in-depth feature here.

The event also marks the visit of two bands from Manchester, highlighting it to be an occasion with proper pull-factor; bringing people together as well as delivering something different. Blanketman deliver wild and wiry post-punk (having previously supported Brix & The Extricated), whilst St Lucifer serve up dynamic tracks glistening with their own dark drama – especially considering the title of their latest album: ‘Music is Violence’ (out now on AnalogueTrash).

There will also be a DJ set from Norman ‘The Cat’ Killon and it is certainly worth noting that the evocative poster was designed by Steve Hardstaff, who is known for his art for the likes of Jimmy Hendrix, Led Zeppelin etc.

This event is part of Liverpool Central Libraries ‘Punk 1976-78’ season. Tickets are £10 (£8 for concessions) and doors are 7.30pm. Considering that I will be Compere for the evening… anything could happen! Get ready for a punk rock party like no other. The event page is here.

Another gig to watch out for, coming up in Manchester is ‘Musicians Against Homelessness with The Winachi Tribe & guests’ at the unique venue of The Alphabet Brewing Co, near Piccadilly Station on the evening of the 23rd February. This immersive event has been organised by the new power duo of Georgina Robinson (Factory Records) and Jo Lowes (Puffer Fish Press, Fab Radio) who are going under the title ‘Birds on a Wire’ to bring high-adrenaline, grassroots talent-championing events to unique spaces in the city. They previously turned Alphabet Brewery into a super-charged pop-up venue by staging the Punks 4 West Papua gig there with The Blinders, Membranes, Witch Fever and Modern Family Unit all taking to the stage.

The Saturday February 23rd event in aid of Musicians Against Homelessness features the energetic flair of The Winachi Tribe, ARGH KiD serving up his hard-hitting music in the form of ‘FRANK’, SWJ Group, Pagans SOH and spoken-word sensation Karl Hildebrandt. This will follow with an immersive DJ set, making it a packed bill of bands and acts to remember. Tickets are available here.