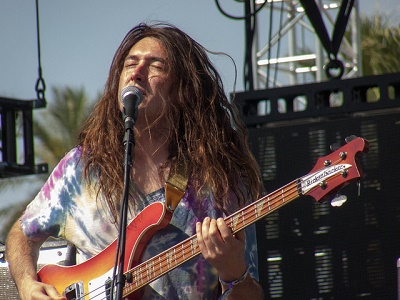 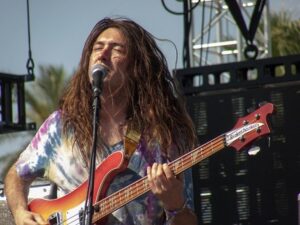 Psych-rocker Ty Segall rolled in to Manchester earlier this week. Louder Than War’s Michael Halpin was there.

It was loud, it was exciting and it was exhilarating.  You could call it garage rock, psychedelic rock or glam rock.  It was done at a breakneck pace and ‘the kids’ enjoyed a good old stage-dive.  Ninety-nine times out of a hundred, you’d be right in saying it was the essence of what rock ‘n’ roll is all about but somehow it was all pretty repetitive and one-dimensional.

Yes, Ty Segall knows how to strangle a good noise out of a Les Paul and, yes, he’s got a good rock ‘n’ roll scream on him, but playing your new album (Manipulator) live, in almost exactly the same running order as on the album itself, is pretty dull.

For an artist who has always seemed to prides himself on change and variety during his career, it was surprising to get such a one-dimensional set list. Part of the problem seemed to be that, unlike the Manipulator album which ebbs and flows dynamically from start to finish, Segall performance of the songs tonight did not. The main problem seemed to be that he opted to use his Les Paul on every single track, with the noise level cranked right up, meaning that the appreciation of his music’s nuances simply could not be experienced.

But before we get to Ty’s we have the support band, The Movei Sta Junkies. Even though they don’t look like they should fit together as a band, their ramshackle aesthetic means that somehow they do. So thrown together do they appear to be that you can’t help but wonder what their story actually is.

Singer Stefano Isaia is an engaging figure. He’s definitely got his own thing going on – with just a hint of both Iggy and Nick Cave thrown in for good measure.

An inventive drummer in Caio Montoro who serves the music in a Mo Tucker style.

Their sound is a melting pot of Gypsy Punk, Garage, The Kinks and Television.

A gift for a melody and arrangements, Movie Star Junkies are a band who definitely know how to write a tune.

Definitely a unique band during a musical period lacking in individuality.

Following that entertaining and intriguing set, Segall had some in-joke telling buffoon going by the name of ‘Jimmy Longhorn’ introduce him and his band on stage. ‘Longhorn’, dressed in a cowboy hat and neckerchief and adopting a strange sort of hillbilly accent, quite unimaginatively pretended to be, of all things – a cowboy – and was banging on about being ‘saddle-sore.’  All supposedly in the name of entertainment.  The truth is it was anything but entertaining and put one in mind of a cheesy American college movie where some supposedly ‘funny guy’ gets up on stage and throws out a few one-liners that inevitably everyone is in on and ‘life’s just great!’

He gets heckled with the word ‘c***’ twice by the audience and then, as if he couldn’t get any worse, began asking “Who’s a United fan and who is a City fan in the audience tonight?”  Luckily, he got away with it.  Let’s just hope he doesn’t do the same thing next time Ty plays Glasgow.

Once ‘Longhorn’ left the stage Segall and his band, The Manipulators, began flying through the album.  All seemed well at first but after The Faker, the realization kicked in that we were going to hear the whole album in order here.  The heart sank, the audience tried to brave it and give him a chance but the damage was done.

Is there anything worse in rock ‘n’ roll than knowing what’s going to come next?

Ceasar and Finger were added to the set but were given similar treatment to much of the Manipulator album tonight.  Wave Goodbye and Slaughterhouse were welcomed closers to mainly because they were not one-hundred-per-cent expected but it was too late, the disappointment has already sank in.

All words by Michael Halpin. More from Michael can be found at his Author’s Archive.