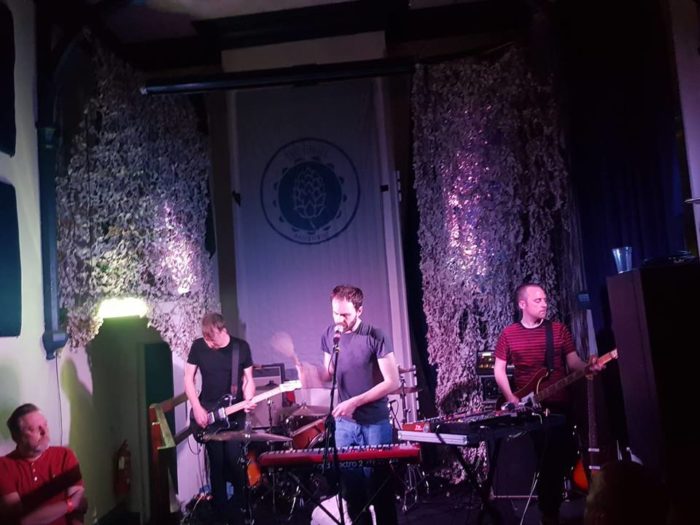 It’s a typically busy and vibrant Saturday night in Nottingham, marked out by some oddly indecisive, implacable weather. A tropical mix and heat and wind which somehow feels present even inside the aesthetically appealing upstairs chapel room of the Angel Microbrewery. A fitting setting, then, for The Longcut, who were similarly hard to pin down with the genre-transcendent at the peak of their success in the mid-00’s. Amy Britton report for Louder Than War.

This will be the Manchester outfit’s first Nottingham gig in over a decade, and expectations are high (particularly for co-organiser Dom Gourlay, who consistently describes them as one of his favourite bands of the past twenty years). Its pretty well-known that I’ve got something of a love affair with The Longcuts side of the mid-00’s, which, whilst I cannot deny the role of youthful nostalgia, is down to the aural (the arty, the angular, the echoes of postpunk) hallmarks of the era which The Longcut represent so well, whilst still being completely unique.

Even with such noteworthy headliners, latecomers to tonight’s gig will surely end up regretting it with the support acts both being extremely impressive. Hull’s The Holy Orders have been described by Tom Robinson as “the band to restore your faith in guitar music”, and in a world in which too many bands sound fey and forgettable The Holy Orders sound strident and bold, striking the perfect balance of being demonstrative without being posturing. To those familiar with them, they’ve already garnered huge critical acclaim, having formed in 2006 and releasing their excellent and much-praised debut album “For The Ears of Dogs to Come” in 2013. These hard-grafters are far from a band who’ve appeared out of nowhere and those having their ears newly opened will have experienced a high volume bolt of adrenaline. Second act Purple Heart Parade might have an amphetamine-evoking name but their music is more like the dizzying kaleidoscope of a woozy acid trip, all layers of sound and winding, ethereal melodies which snake around the walls of the chapel room with elegant precision. Comparisons with acts like Spaceman 3 will be inevitable but Purple Heart Parade still inject their take on shoegaze history with their own personal and fresh slant.

With the atmosphere well and truly built expectations have hit a peak by the time The Longcut emerge onstage. Thankfully, they deliver everything expected of them and beyond. Mathematical precision blends with rulebook-shredding; the sound and vocals are so powerful that the floor and walls seem to reverberate with every note. I hadn’t seen The Longcut live back in the Noughties so this is my first live experience of them and it’s hard not to be impressed with how they take the sharp sound of their records and somehow expand it into something even bigger, clearer and more expansive. They close the set with A Quiet Life and it sounds utterly anthemic; the guitar line thick and all-encompassing as it pounds through the room.

Above all, with three rather different sounds on the bill, tonight is still best defined by impressively “full” sounds showing it doesn’t necessarily take a lot of people, or overblown tactics, to achieve that. An all-round musical powerhouse of a night.

Special thanks to Dom Gourlay, Jordan Dowling, and Mark Moore for organising