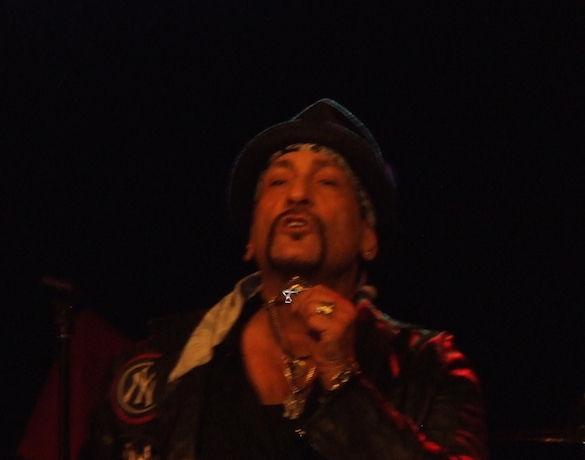 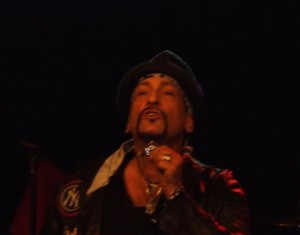 Pushing 40 years as a band, punk pioneers The Dictators still insist on sharing their sweat with the crowd. Martin Haslam was on hand…

It’s often with mixed feelings that I decide to shell out and see a reformed/rebooted ‘classic’ band. You know the sort of thing; is this just for the money/desperate and uninspired/one original and hired hands? All bands are different, thankfully. I, for example, can’t think of The Who as being only Daltrey and Townshend. Doesn’t work for me. Some are happy with this. Fair enough.

So, before spending my meagre pennies, I checked online re. the current Dictators NYC line up. For your pound you get; ‘Handsome’ Dick Manitoba, secret weapon/vocalist; Ross ‘The Boss’ Freidman on guitar and J.P ‘Thunderbolt’ Patterson on drums. Good stuff. Add to this Daniel Rey on guitar (Ramones producer) and Dean Rispler on bass and it seemed more than worth a punt.

As it turned out, tonight was similar to seeing the reformed Mott The Hoople at Hammersmith in 2009; a privilege to finally witness a band I’d previously had no chance of seeing. Who’d have thought 47 could be ‘too young’? Well, if I can own a stage like Handsome Dick does at 60 yrs old, I’ll be very happy.

Firstly, however, the support bands. Always get there on time; there’s nothing worse than twonks shouting to each other while ignoring the supports. Manners. Guitar Gangsters are a pop punk three-piece, similar in places to the catchier elements of Green Day, if a little older. They are tight, enthusiastic and have enough hooks to keep the audience interested. An added bonus is the harmony vocals of bassist and drummer, which gives the songs an extra edge.

Electric River are up next. I saw them last year supporting Walter Lure and once again they give the impression of a band on the verge of playing to much bigger audiences. Their debut album has since had rave reviews, and while they’ve nailed their distinctive sound, somewhere between Springsteen and early U2 and are very professional without being pretentious, they are lacking the ‘big hit’ to my ears. Which, given my track record, means they’ll be huge.

By 9pm The Dictators NYC hit the stage, and in the rush to get some half-decent photos and the excitement, I’ve forgotten what song they opened the set with. What I do know is they sound exactly as I’d hoped. They play a wide variety of songs from all their albums, including the 2001 corker ‘DFFD’, which I’ve been listening to a lot recently. Get it if you can, it’s great.

Handsome Dick looks nothing like his grinning loon of a face from the cover of ‘Go Girl Crazy’. Slimmer and minus the massive Afro, he actually looks more like Sly Stallone’s seedier brother. He sounds like it too, during his regular between-song banter. It could veer too close to panto, but Dick is too interesting and too self aware for that. He vents spleen on Gene Simmons for keeping a gap between band and audience, insisting that he wants to “feel your sweat” first hand. So, during ‘Baby Let’s Twist’ he joins the audience and stays there for some time, surrounded by camera phones.

During the set, I realised again just how many bands The Dictators have clearly influenced. There’s hints of Ramones (who chose ‘California Sun’ after seeing them play it live), Twisted Sister (who’s bassist was originally in The Dictators) and even the intro to Rainbow’s ‘Since You’ve Been Gone’.

The band are just the right side of tight; you can’t be too loose with these songs. The power is retained on ‘Faster And Louder’, ‘Slow Death’ by The Flamin’ Groovies, ‘Two-Tub Man’, ‘Avenue A’ and ‘Pussy And Money’, while ‘Who Will Save Rock N Roll?’ is the anthem that you should have heard; Dee Snider must wish that he wrote it. Classic.

The obligatory encore, and I was expecting ‘Search And Destroy’ but tonight we get a hectic ‘Kick Out The Jams’. Ross The Boss is clearly having a ball but this isn’t the Dick and Ross Show; this is clearly a band.

So, if you were thinking of going tonight and stayed at home/went to the pub, YOU MISSED OUT! Handsome Dick has stated their desire to return next year for their 40th anniversary. Be there.

All words by Martin Haslam, find his Louder than war archive here.