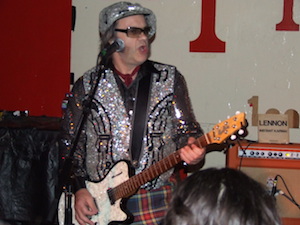 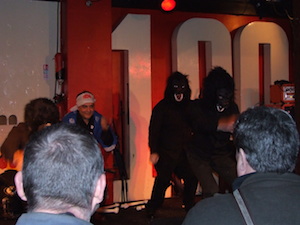 Since I’ve been writing for Louder Than War, I’ve been lucky to have come across(not ‘discovered’; they were already there) a few bands who really excite me. Via the advice of Alison Bateman of Work Hard PR, my joint faves, alongside Jonny Cola And The A-Grades, have to be The Bermondsey Joyriders. They embody the true D.I.Y spirit of punk with a healthy dose of entertainment, humour and wit. And as Gary Lammin, Martin ‘Gentleman James’ Stacey and Chris Musto have played in or with Cock Sparrer, Chelsea and Johnny Thunders‘ Oddballs, you can trust that they’ve been there and invented a t shirt or two along the way.

The revered 100 Club is a great choice for their album launch tonight for third long player Flamboyant Thugs; out on Fuel Injection on May 26th. Intimate, charismatic and reassuringly packed out tonight.

This was more of an old-style ‘happening’ rather than a standard gig. First up were The Action Men; five chaps who take to the stage in white, doctors’ coats, dancing in formation to old classic Dr Love, emblazoned on the back of said coats. Think that’s odd? Oh no! Their second set, later in the evening, started with a slo-mo re-enactment of the intro to 2001 A Space Odyssey. Dressed in black, with ragged gorilla masks and giant bones, this segued into another dance routine to Karate. Yep; gorillas dancing karate style, with a low budget 70’s ninja type fella with tea towel bandana. Honestly, as far as entertainment goes, they were great.

First proper support band, WitchDoktors, had a neat line in garage rock, with a hint of RFTC. Matching shirts, catchy riffs and no shortage of energy, I’d like to see them again. Unusually, the sound could have been louder, though no fault on their part. 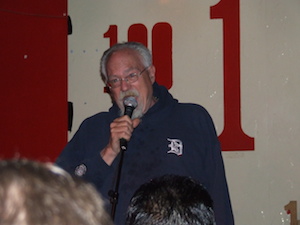 Up next were The Phobics. I found it hard to tell how they actually sound, as the band seemed to be at odds with one of their guitarists. Or rather, fed up with his between song rants. Maybe this is normal, but it didn’t help. When your singer unplugs your vocal mike, maybe you should take the hint. There were some nice Buzzcocks style moments, as if Devoto had never left, but sadly, it was a wasted opportunity tonight.

So, onto the Joyriders. I’ve had the promo of Flamboyant Thugs for a while now, and it still sounds great. Slightly more direct than Noise And Revolution but keeping a link through the smoky tones of narrator John Sinclair and his southern drawl. He is here tonight, to bring the jams, obviously, and a spoken word interlude to their set. There are so many great tunes; album opener Sonic Underground sounds even better live, and settles in nicely next to Stand Strong, Shaking Leaves and Right Now. They played non-album single Brian Jones(The Real True Leader Of The Rolling Stones)/Johnny Thunders Was A Human Being, which I’d recommend you hunt down on white 7″ vinyl, as they are equally fab.

A quick blast of “Who are ya? You what?!” reminds me I still need to buy the first album. It’s been a very entertaining night; tartan strides, sequinned shirts and dancing gorillas. You REALLY should have been there.

Bands mentioned in this review can be found on social media here – The Action Men,  WitchDoktors, The Phobics,