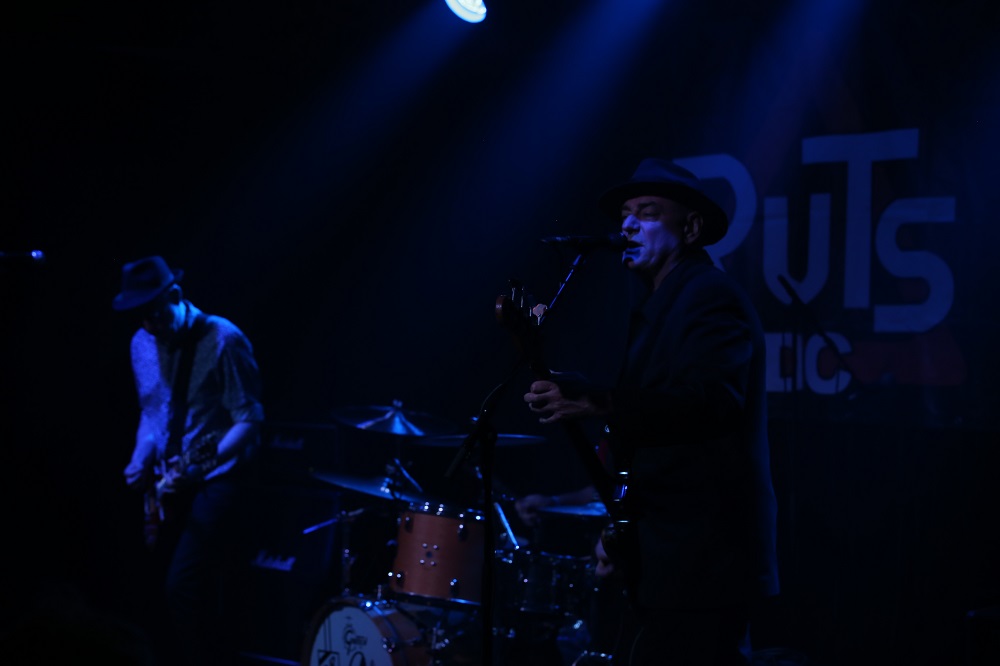 Sometimes the old punk bands still doing the circuit can end up as a sad tribute act to themselves or worst still a grim parody of their glory years.

Not so Ruts DC who, as one punter said, sound as fresh now as they did in their heyday as one of the best punk/reggae bands of that period regularly giving The Clash a run for their money.

Fans of punk history will be aware they added DC – meaning Da.Capo which is a musical term for back to the beginning – when their original frontman Malcolm Owen died of a heroin overdose in 1980 just as they were about to make the big time after a series of hit singles.

Since then the remaining members have been working on and off as one of the most powerful combos around, bringing new energy and real anger to S.U.S. from their classic first album The Crack. As bassist Segs Jennings – who ably took over the vocal duties – notes, it is depressing that the stop and search measures that the song condemns have come back into force nearly four decades later.

The mood changes when they do Mirror Smashed from the underrated Animal Now released after Owen’s death, which was clearly a very personal song for a band who lost their mate in the worst possible circumstances.

The reason Ruts DC remain relevant is they are all quality musicians determined to make interesting sounds, and the title track off their last album Music Must Destroy proved they still have it with some sterling rock guitar work from Leigh Heggarty driven by the ever reliable drumming of Dave Ruffy.

The place goes wild when they launch into their classic single Staring At The Rude Boys that made their name and as Jennings observes, the reason they don’t get bored playing the oldies is that they are always trying to play better versions than the ones recorded all those years ago.

The only misjudged moment was a tired cod reggae cover of Love In Vain that just didn’t go anywhere, but new tunes Peace Bomb and Kill the Pain were reminders of how good they still are as songwriters. Then it’s  singalong territory for their hardcore fans assembled here tonight, with a spirited In A Rut followed by the power-pop of Babylon’s Burning which is still as essential today as the day it was recorded.

The wistful pop of West One (Shine On Me ) would be great way to end any gig, but the trio seem inspired and are joined by Stranglers singer Baz Warne for a decent cover of Suffragette City, which given their vintage is clearly a tribute to another more recently departed singer who must have been an influence.

This was a warm up for the Rebellion punk festival just up the road in Blackpool, but it’s hard to imagine that any of the vintage bands that weekend could turn in a better set that is still relevant to today’s issues.