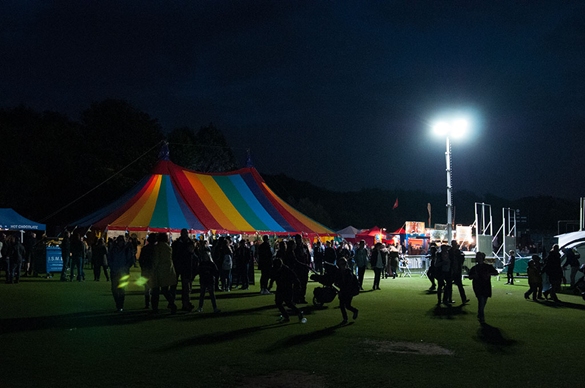 It was a celebration, both of Northern music and music from around the country. With local ales, great food and things for everyone to do and see, I can only see this festival getting bigger from here. Situated in Ramsbottom Cricket Club, the weather stayed (relatively) well behaved for the weekend, with only the occasional and fully expected shower. But that did nothing to damped the spirits of the rambunctious crowd, and the Rammy Festival organisers definitely knew how to throw a party.

The first band I caught was up and coming ska band By The Rivers, whose latest single Vulture was a real ear-worm with incredibly catchy hooks. Next up were a couple of my favourite local bands. The Tapestry (from, according to them, Shameside) generated a huge crowd, and it was no wonder. Their show was electric, packed to the brim with dirty riffs and snarling vocals. You could feel that they were following in the footsteps of other Mancunian legends The Courteeners, and it’s clear that they’ll only go further.

Over on the Smaller Rooms stage The Minx, another Mancunian band, brought their punky ferocity in full swing and whipped the crowd up into a frenzy. But it was The Levellers that had the biggest turnout, with many people only coming for the day to see them. They didn’t disappoint, and it’s easy to see why they have such a long standing reputation as a fantastic live band. Their show was eclectic and high energy. They could have the crowd belting back every word one minute and hypnotized by a neon dressed man with a didgeridoo the next. 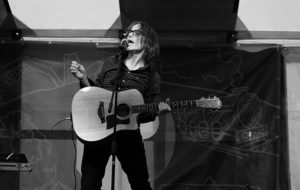 Throughout the weekend the family vibe was strong with lots on offer besides music, and they drew massive crowds. We had high flying aerial theatre (Pif Paf, Something To Hold) telling the story of an astronomer and two stars, a tantalizing Victorian/vaudeville installation called Shadowplay from Walk The Plank which appeared at dusk, Less Infants Terribles Marvelllous Imaginary Menagerie, which was a performance of entertaining creatures telling incredulous stories, which had us all enchanted. There was also lantern making workshops, various arts/crafts, classes for the younger festival goers and face painting.

Randolph Swain, dressed in a spacesuit, kicked things off on the main stage on the Saturday, with a surprising psychedelic rock sound with samples from space flights (not unlike Public Service Broadcasting). A personal highlight for me musically was Vinny Peculiar. I entered the Smaller Room stage not knowing what to expect, but Vinny – a sort of Jarvis Cocker-esque wordsmith and poet, had me and my dad singing, dancing and laughing with his eccentric acoustic rock (although I’m not sure if a couple of his songs were entirely appropriate for the kids.)

We bought his album afterwards and have had it on repeat in the car since. The Chameleon stage was packed out of the door by blues rock outfit Gorilla Riot, who easily became one of my biggest surprises of the weekend. Following in the footsteps of bands like The Black Keys, it was amazing that three guys on such a tiny stage could make noise like they did. It wasn’t all about loud guitars and bass at Rammy festival though. Gorgeous George, as well as the band afterwards The Skints, proved that reggae and ska music is still alive and in full swing. Gorgeous George had everyone in hysterics with their Madnessesque South London humour, with a particular highlight being a song about a cowboy builder, John Wayne, sung in the style of a Spaghetti Western which included the lyrics, “John Wayne, he’ll lay your patio in about 3 weeks or so”, including trumpets. The Skints reggae sounds had everyone dancing afterwards, especially with their brilliant cover of Katy B’s On A Mission. 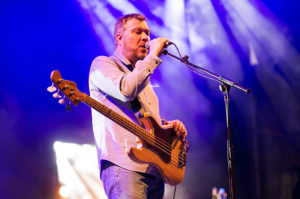 But the highlight of Saturday had to be Jimi Goodwin formerly of Doves. It’s difficult for someone from such a well-established band to forge his way as a solo artist, but Jimi has done it gracefully, thanks to his husky tones and anthemic singles like Oh, Whiskey! He really was a delight on stage and had the same charisma and wit as someone like Guy Garvey. It had everything; soulful moments, folk and rock were all interspersed to keep the crowd guessing.

A real treat, especially when compared to the supposed headliners of the Saturday, British Sea Power. Billed as one of Britain’s best live bands, their show started off hopeful, with the stage full of trees and the promise of dancing bears to come. Even the first couple of songs were rousing and well performed. But by the fourth, it was apparent that the frontman was incredibly drunk – restarting songs from forgetting lines, throwing guitars in the air and warbling and screaming down the microphone. It was a real shame, as this was probably the band I was most looking forward to, but behaviour like that really is unacceptable for a professional musician at a family friendly festival, and after only halfway through the set, the majority of the crowd had disappeared, with many more complaining about the lack of showmanship. But although the Saturday ended on a bit of a downer, there was still another day to come.

By Sunday the vibe had changed dramatically thanks to the shining sun and the wonderful array of folk music on offer. Rum Thief kicked things off for me, a four piece band playing early on the Chameleon Stage on a Sunday, reminiscent of the likes of King Krule, it definitely kick started some energy into the festival weary crowd and managed to get the place packed out by the end of it. Next up was Harp And A Monkey, a band local to Ramsbottom who’ve worked their way up through the stages. Playing traditional folk songs with a modern twist, it was perfect sunny day music with a bit of Manchester history to boot. There was more folk selection later on in the day too, with both Mad Dog Mcrea and Keston Cobblers’ Club delivering incredibly rousing performances in the Smaller Rooms stage, particularly with Mad Dog’s fantastic rendition of The Bear Necessities.

The highlight of the day was definitely the Neville Staple Band, though. A living legend in his own right as a former singer with The Specials, Neville Staple blasted through a hit filled set that got everybody dancing. It was a history lesson on the greatest ska hits from Message to you Rudy to Ghost Town and it perfectly accompanied the blazing hot sun. And then finally, the last band of the weekend was Soul II Soul.

Not particularly a band I was looking forward to, but nonetheless a great band to end the weekend with. The R&B Gods of the early nineties definitely knew how to throw a party and pretty soon everybody was dancing and singing along, with the fantastic singalong that is Back To Life saved till last. And then it was over. As for some closing thoughts, I couldn’t help but feel that perhaps 2 days would better suit the festival, allowing it to be packed to the brim with music to choose from. It was nice that there were hardly any clashed, but perhaps it would have been better to give us a little bit of a choice. Still, it’s definitely the best family festival I’ve ever been to, and I can’t wait to see what they put on next year.

Words James Lowther. More writing by James can be found at his author’s archive.

Photos by Melanie Smith. More of Melanie’s photos can be found at her author’s archive. Melanie’s website is here: mudkissphotography.co.uk.