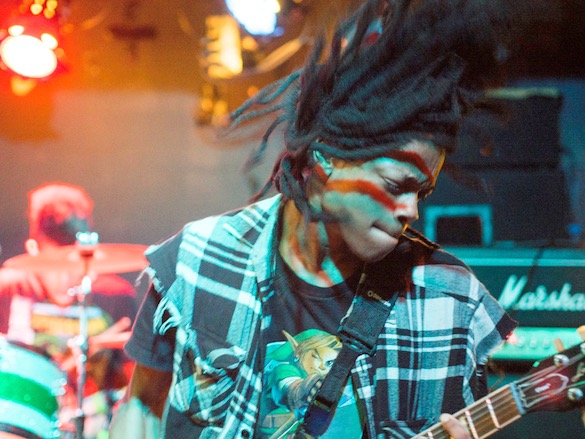 Missouri’s Radkey tear up Bedford with Louder Than War’s Martin Haslam not only heading down to review, but also heading down as support in the form of his band The Degenerates.

Well, here’s a turn up; I get to review the gig AND play a support set. With this dilemma in mind, I asked reviews editor Guy Manchester if this was ok, provided our local photographer Alex Grady would review our set. With the green light given, it was all systems go for a hot June evening in exotic Bedford (ahem).

We do get some prestigious acts at Bedford Esquires; Royal Blood were here only a few weeks ago. So, I was doubly pleased to get to see the frenetic energy of Radkey as well as playing a support set with The Degenerates. 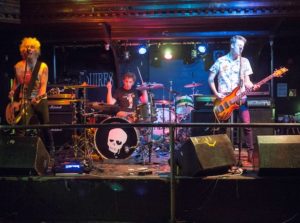 More of that later, though. First on tonight were !Hazard!, a youthful three-piece punk band of the more traditional (or classic; I don’t like the term ‘old-skool’) variety, from Luton. They certainly put their stamp on the proceedings, with no shortage of confidence or tunes. Rattling off with ‘Destroy’ and ‘Hazard’, they inhabit the more melodic end of UK Subs territory, with something for Clash fans via their choruses and energy. Not just the confidence of youth, they have the talent to back it up.’Redeploy’ and ‘Freedom Fighters’ ended a tight, enjoyable set. This was a big leap forward from the tunes that they put on Soundcloud some three years ago. Their constant touring has helped develop their sound. They’re putting the finishing touches to their debut album now. Watch this space.

Over now to Alex Grady, who provided tonight’s photos, for his review of The Degenerates’ support set; 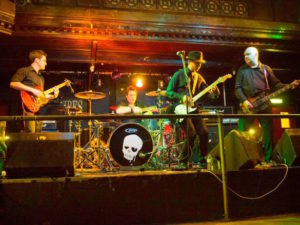 It was a damn hot mid-June night, just the kind of night people like to lay by a pool or eat a barbecue. Those in Bedford thought ‘lets get even hotter and listen to three bands rip our ears off’. In the mid-support slot stood The Degenerates. Starting with ‘Degeneration Nation’, they play with a furious energy, part anger, part joy in rock n roll. ‘Two Minutes’ follows, then ‘Right Side Of Wrong’, the rhythm section never misses a beat. And what a beat; drummer Darrell plays like a man possessed, he does not simply play the drums; he hammers them with a fury that every strike has the energy of a dozen warheads, again and again.

I have always thought you can tell a lot about a band by the covers they choose. Here, we have The Ramones‘ ‘Bop Til You Drop’ and The Kinks ‘I Need You’; two very different bands, always a good sign. But in each cover they put their own high-energy style. There is some Ramones in there, some Stooges, but it is more the raw energy that is harnessed rather than being a pastiche.It is the forceful nature of this energy with its angry, F*** It attitude that is so enjoyable. The Degenerates are great entertainment; the set seemed to last ten minutes but was a lot longer, and time flying by is always a sign of having a good time.

I didn’t pay Alex, honest. The Degenerates were truly the thorns between two roses, as far as looks and youth goes. Privileged to be a part of tonight.

So, taking to the stage by 9pm to placate the football fans, Radkey proceed to show Bedford just what all the fuss is about. It was already baking in here and it’s about to get hotter.

Twelve songs with minimum chat, other than to charmingly apologise for their “boring accents”, it kicks off with ‘Out Here’, ‘Le Song’ and the classic-in-waiting ‘Little Man’. Album title track ‘Feed My Brain’ gives a taster of the upcoming debut long-player, while ‘Start Freaking Out’ entices the audience to do just that. Isiah bobs constantly about with his bass, Dee is a blur of dreads when not singing and I think Solomon must be the happiest looking drummer ever. He looks like he can’t believe he’s getting to live his dream.

Ending with ‘N.I.G.G.A’ and ‘Romance Dawn’ the football result is superfluous tonight (for me, anyway). Who cares, when you can start freaking out in a small, sweaty venue with Radkey and friends? I doubt they’ll be playing clubs of this size for long, so catch them while you can. To cap it all, they’re real gents who make time to talk to anyone after the gig. Their success is truly deserved.

You can check our Radkey’s personal website here. They’re also on Facebook and Twitter. Both !Hazard! and The Degenerates can be found by clicking the links in the above piece.