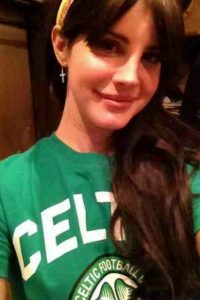 Lana Del Ray is a writer first and a singer second. She herself claims that it’s so, and so we must believe it. That’s an important piece of information right there, and we might find it helpful to pause and consider what that means. She brings an emotional literacy to her song-writing that obviously resonates resoundingly around the planet. There is also enough enigma attached to her. There is certainly enough back-story, such as the talk of a mysterious Svengali figure cultivating her precocious, almost Lolita-like talent as a youngster, the tacit suggestion or hint of the power-skewed wrongdoing towards her…

There is a nostril-filling, fully permeating sense of slightly dangerous feminine sexuality that is brooding, pouting, hinting at the delicious heartache that is sure to come if one gains entry into her promise filled boudoir. Hers is a sophisticated, artfully crafted aesthetic. Of that there is little doubt.

On a recent whirlwind trip into the UK, playing only three dates, there was speculation, certainly here in Scotland, about how deliberate it was to play the comparatively small Brixton Academy, and then two Arenas in the atmospheric northern music citadels of Liverpool and Glasgow.

There was a tension in and around the Glasgow Hydro in anticipation of Elizabeth Woodridge-Grant (Lizzie) AKA-Lana del Ray – whose Daddy reportedly hails from Motherwell. Sources also nattered about a former lover that she lived with here for a year or so, a heart-warming notion that she validated from the stage later-on in the show.

The venue is conspicuous by the number of girls and women in attendance. When she finally sauntered onstage with that lithe-limbed elegance and grace, it was to set ‘her’ own mood with Cruel World. It’s deliberately Lo Fi. However, this was immediately contrasted by a roar more suited to Scotland’s national football stadium, Hampden Park.

Cherry, which followed, is a crowd-pleaser and personal favourite, and evokes such incredible sadness and loss, causing the expansion of the muscles of the heart, whether by merit of the minor chords, the lyrics, or the sheer emotional bedrock it accessed, producing the illusion of being agonizingly all alone in this cavernous crowded arena!

Shades of Cool, is seemingly an ode to co-dependency:

A pin could be heard dropping in the Hydro.

Blue Jeans transported one back to Thailand where it was first heard at the onset of something special when hearing those words sung for the first time:

‘Love is mean, and love hurts…’

…and knowing full well that the hurt and pain was in the post, but proceeding wilfully, and glorying in that knowledge: of being alive, and grateful with it. No one in Glasgow was privy to that internal landscape: There was only love and death. What else mattered? Everything else was fodder.

All these songs are evocative, at the core of her success is the premise that she is a writer.

White Mustang, Born to Die and Music to Watch Boys To – are no exception. She reeks of authenticity, and she is heartfelt. The songs are congruent with the tiny figure of the ‘girl’ poised on the stage, whether that is imagined or not doesn’t matter. The cynics and critics are silenced for this present moment, and any inclination of one’s own internal critics to deconstruct or demystify what she has put together for our consumption would be an exercise in Bad Faith, and Q.E.D immediately dismissed.

‘He said I was poison – I could have died right then’ she sang.

It is an indictment of man in the shadow of all the attributes of the Divine Feminine when he shrinks from and allows himself to be dwarfed by Her light; won’t accept Her power in all its splendour and dynamic glory…

Our Lizzie, if one might be so bold, stops and speaks with her audience before launching into Change:

‘This is the last song I wrote for the last album, Lust for Life, but one of the most important. I was feeling a shift globally, in the US, but in myself, it was in the opposite direction, and I just feel blessed to be able to share these songs with you….!’

This was better public relations for America than anything else in a long time.

Ride, Video Games, Summertime Sadness, Love, and Off to the Races end a thoroughly magnificent show by a Superstar who harkens back to a time when music seemed less homogenized than now; when our Artists seemed to sing more about real experiences, real emotions, and real people. Our very own Patsy Cline for the Noughties – minus the booze we hope.

At the end of her performance, Lana looked down into the crowd, half speaking, half gesticulating to someone with flowers:

‘Are they for me?’ she asked, and then went down into the Glasgow crowd to collect them, unfazed by any peril contained therein, and in possession of an apparently full sense of her own safety here in Scotland.

Might we claim her as our own, Pretty Please?

All words by Harry Mulligan. More Writing on Louder Than War can be found at his archive.