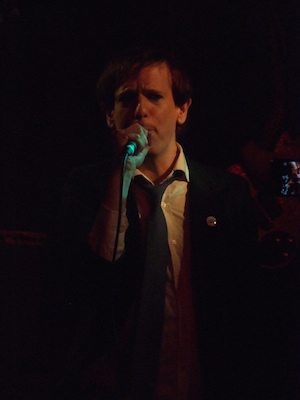 Last year I had the unexpected pleasure of reviewing Spitfire by Jonny Cola And The A Grades for Louder Than War (see review here). I recall being a little reticent before playing the disc, thinking “not sure about that band name”. Oddly, a year on, it seems to suit them perfectly; they really aren’t like anyone else. Spitfire was in my running for Album Of The Year, narrowly overtaken by Remain In Hope by Eureka Machines, but in all honesty I can’t separate the two. It’s a stunning work of arch glam pop, expanding on their previous releases in scope and ambition.

Last October I finally saw them live at the tiny but atmospheric Brixton Windmill. They were a four piece for the night; guitarist Mauro Venegas awaiting the arrival of his first child, who, memorably, arrived that night. Jonny shared the text with the audience, and somehow I felt even more connected to this strange and wonderful band.

They were great as a four piece, but tonight, at the Camden Barfly, I witnessed them in all their pouting glory. Yep, I’d been told previously that Mauro brings the pout along with his stinging solos, and they weren’t wrong.

First off, thanks must go to the support bands. HOTGOTHIC are an interesting trio. I’m too old to guess what genre this comes under nowadays, but they sounded like Sheep On Drugs attacking Sisters Of Mercy. No guitar, just bass, keys and a nicely savage drum machine. They certainly enjoy themselves and were very entertaining. 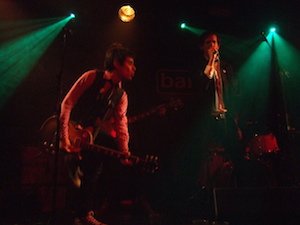 Next up were The Featherz. In all honesty, more to my tastes, they have no shortage of glam tinged tunes and energy, not least from frontwoman/guitarist Danie Cox. Even the cover of Ziggy Stardust can be forgiven when your hair looks that good. Great fun.

The glam stomp of In The Woods follows. Mauro’s backing vocals do make a difference, and the band seem to be enjoying every moment.

We get Rubber Band and Halo (if you heard it, you’d love it), before new song Oh Gabrielle proves they aren’t short of ideas. Cola himself is in fine vocal fettle tonight, whether striking shapes, carousing with Mauro or playing keyboards. Reassuringly, he spills a lot of drinks; so, he is only human.

Straight To Video, Marlborough Rd, The Party’s Over, then it suddenly is with a fantastic Ripples which sees Mauro and Jez shred the fretboards. I must mention Simon and Marco; their tight but swinging rhythm section. They make it all sound easy. It isn’t. Which is why you rarely see or hear bands this good. I’m passionate about great bands, as I hope you all are, so do yourself a favour and catch them live next time. And if you like it, buy the album.

Jonny Cola And The A Grades website is here. They are also on Facebook, BandCamp and SoundCloud.