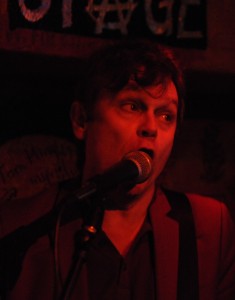 It’s a Sunday evening, holding the door open for the working week.

It’s a wet, miserable day. It’s the last day of January. All in all, what better time for an evening of vibrant power-pop courtesy of Duncan Reid and the Big Heads?

Having established his career as bass player for The Boys during the high peak of punk, and spending the past few years creating solo material of fantastically melodic quality, Reid is a kind of prefect of punk-pop perfection, but the evening starts with proof that the newer generation isn’t short on such songwriting either, as Reid’s own guitarist Tommy Lorente steps up to play a solo set of his own.

Full of subtle confidence, the French singer/songwriter plays with pop sensibility with has keeps the audience engaged in spite of singing in a foreign language – no easy task. The first act of four in a great value evening, the next act to take the to the stage is Andrew Dawes and Trond Lysaanes. I first saw Dawes supporting Dave Sharp in this very venue this time last year and wrote in my review then how impressed I was with his crafted songwriting – the addition of Lysaanes on whistle adds a haunting extra layer of depth. The story of Dawes and Lysaanes is something really quite special – having met at an Alarm convention, the shared musical bond keeps the two of them musically together in spite of one living in Norway and one in Nottingham. If ever there is a story to reinforce the power music people can have in bringing people together, this is it – and all the strength of their recorded material (well worth getting your hands in if you appreciate traditionally honed songwriting) continues onto the stage. Next up are the ever-reliable Static Kill, a band I’ve watched grow from the start playing tonight with yet another leap of confidence and the addition of some solid new material.

And so Reid, flanked by Karen Jones on some bared-down percussion and Lorente returning to the stage on guitar, rounds off the night in impeccable style. Clad in trademark purple and throwing knock-kneed New Wav shapes, he powers through some of the Big Heads material, interspersed with chunks of warm autobiographical story telling which fit the intimate setting perfectly.

The likes of “C’est La Vie” and “Baby Doll” really should be modern pop classics, brimming with a catchy energy. When Reid announced that he is about to play a brand-new song, “Lets Skip to the Good Bit,” it seems so instantly familiar that for a moment I’m convinced I’m already familiar with it, before realising that thats because I’ve merely heard it once, in the soundcheck earlier – I imagine few could have the knack of such exemplary pop sensibility, in the same way few could pull off a flawless cover of “Jeepster” the way Reid does.

Much of the impact of tonights set lies not just in Reid’s energetic demeanour, but in the innocent quality of his voice (I don’t doubt for a second that the youthful looking Reid has an ageing portrait in his attic, but I would presume there is one of his larynx as well) -when he plays a crowd-pleasing rendition of “First Time”, Honest John Plain’s tale of lost virginity and adolescent awakenings makes as much sense as it ever did. The man formerly known as “Kid” Reid might have grown up a bit, but his willingness to stick to vibrant power pop (which I have a soft spot for anyway) suits him very, very well, making for a highly recommended live act to round off a wonderful evening.

All words by Amy Britton. More articles from Amy available on her archive at www.louderthanwar.com/author/amy-britton and she can be found on Twitter as @amyjaybritton. Photography provided by Michael Prince – see more and find out more  at www.principlespix.co.uk