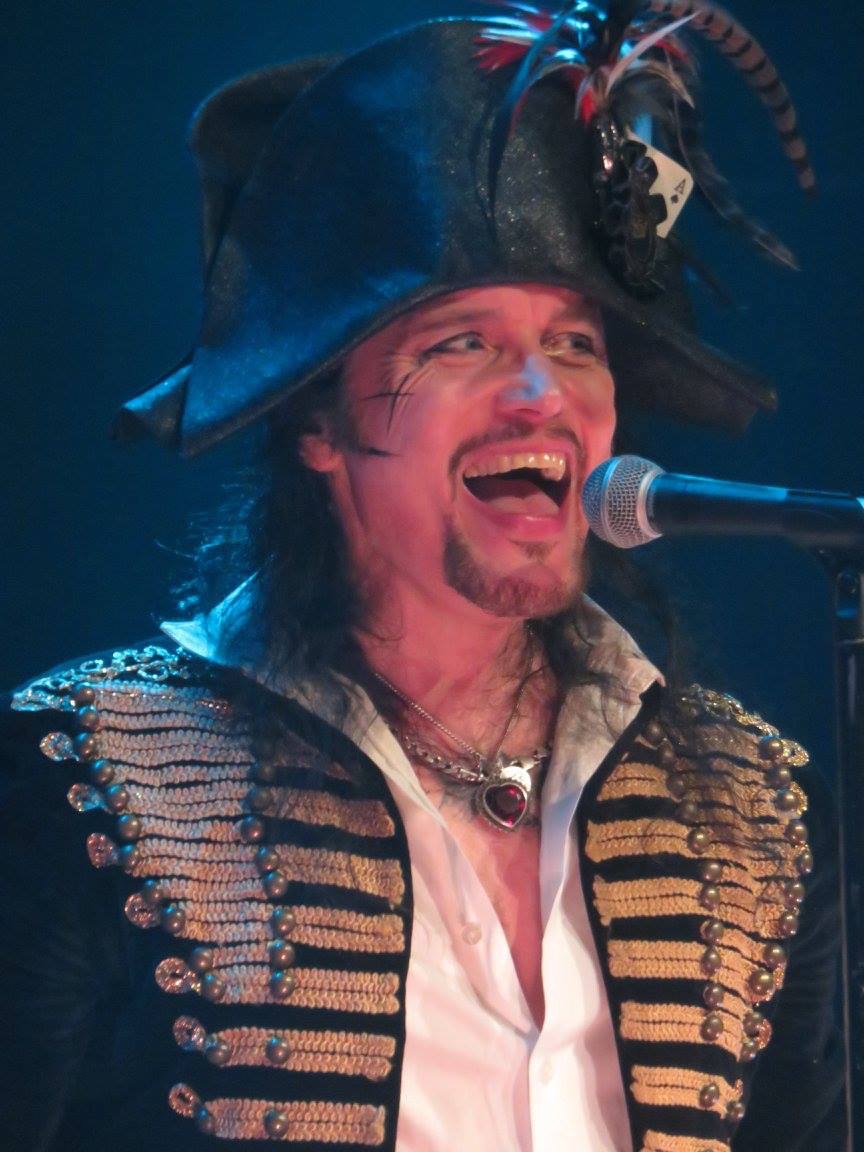 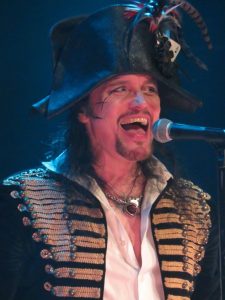 Directly after a dazzling and masterful symphonic overture, “633 Squadron”, (The City Of Prague Philharmonic Orchestra), which served as an introduction fit for a Super-hero, the ravishingly handsome, Adam Ant jumped onto the stage and in a flash, rocked the first song “Dog Eat Dog”, which instantly captured the fanatics with his powerful magnetism and vivacious, animated flair, unique only to him. The entire venue rose from their seats, never again to revisit them, as Adam gifted his fans with the essence of self-assurance, as well as a melodic vocal clarity, and a contagious yet playfully devilish smile. I’ve personally never seen Adam more alive and spirited than on this tour.

Somewhat like the mythological Phoenix, who rose victoriously from the ashes, Adam Ant is a trophy of a second chance. Who does that? Who comes back after 17ish years, and reinvents himself to become more popular, more in demand than ever? “In books, as in life, there are no second chances….on second thought: it’s the next work, still to be written that offers the second chance”- (Cynthia Ozick), and Adam wrote it. Second chances rarely happen by chance, but gladly whatever it is that Adam did, he’s greatly welcomed .

From the tremendously talented support fraction, ” UKFeds”, all the way through to the merchandise counter, executed by Roy Jenkins, the concert was a supremely epic, and a monumental class act.

There are also no words to describe the tightness and talent of Adam’s band. Not only were they carefully and professionally in sync with each other, but like an astronaut in space, they seemed to know telepathically what their very next step had to be. Hats off to Will on guitar, Joe on bass, Tom on guitar and the 2 fabulous drummers Andy and Yola….some of the most musically adept masters.

It makes little sense to reiterate the fact that Adam performed the entire  “Kings of the Wild Frontier” album, ( which was also just released in a charming, remastered deluxe box form ), or that he also went on to treat the fanatic’s  to some of his favorite tunes, ( “Viva Le Rock”, “Lady”, “Christian Dior”, “Beat My Guest”, “Fall Out”, just to name a few ), or that he came back to encore “Get It On”, a song by Marc Bolan, who probably died without realizing his true greatness, as earlier reviews have reflected the performance in detail. However, anyone can construct a review and critique an artist, but true criticism comes via the hardcore fans of the performer:
Lee: ” Best I’ve ever seen him”
David: ” I nearly cried. Unbelievably brilliant tonight”
Robert: “What a show, his vocals where superb”
Julie: “Class concert this one”
Paul: “fuuuuuuuk meeeeeeeee”
Amanda: “An hour and 50 minutes he was on, no break, got to admire his stamina”
Sushi: “He wore me out, I danced the whole night”.

Julie:  “What an amazing show last night…I’m still on a high now. Brilliant lighting, great band and Adam was on top form. Looked like he was really enjoying himself and was very chatty and charming”.

Carolyn: “What a fantastic gig. He performed, and looked absolutely fantastic. Even hubby enjoyed it”

There is no doubt that I could continue relaying the contents of these comments for weeks to come…. It’s been months since the fans, not only in the UK, but worldwide, have been feverishly bussing up a storm about the coming event, and have considered the KOTWF Tour nothing short of a prelude to heaven. It’s certainly a true credit to the impassioned Ant, did not disappoint them. There was not one derogatory declaration regarding this flawless concert, from the many Ant fan pages on Facebook. I guess Adam was able to challenged and defy the statement, “You can’t please everybody”, as he arose to that task victoriously.

The audience at Oxford ranged from a tiny little Adam Ant adorned boy, age 5, to an over excited great grandmother of 85. The sold out “New Theatre”, with a capacity of 1,800, was filled with joyous exhilaration, widened eyes, bright smiles, and plenty of dancing about.

There is a powerful distinction about Adam Ant that sets him apart from so many other artists who try to be creative. Perhaps it is the fact that he’s a lyrical genius and capable of writing words such as: “Ridicule is nothing to be scared of”, or “as the masters rot on walls, and the Angels eat their grapes. I watched Picasso visit the planet of the apes”, or “And if evil be the food of genius. There aren’t many demons around. If passion ends in fashion. Nick Kent is the best dressed man in town”. Perhaps it’s merely his ability to elevate an audience to an orgasmic height with such ease. I’m sure that his tantalizing sex appeal, piercing blue eyes, and titanic good looks have nothing to do with it either. One can easily sense a deep, soulful quintessence about the man that he readily brings with himself to the stage.
As if he were in a time capsule, the “Ant warrior” magically took 35 years of music and made it sound more relevant and authentic than anything played on the radio today. There is but one show left in Brixton on June 10th. Do whatever it is that you need to do to see it!