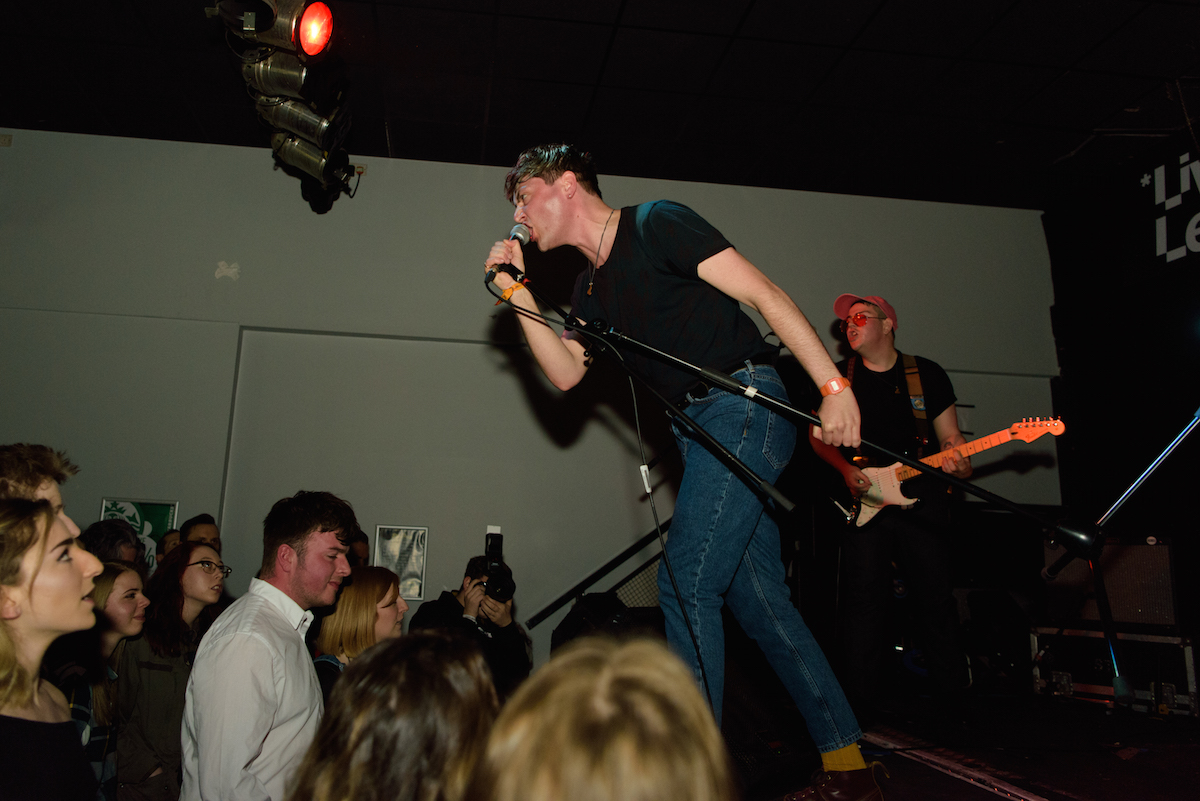 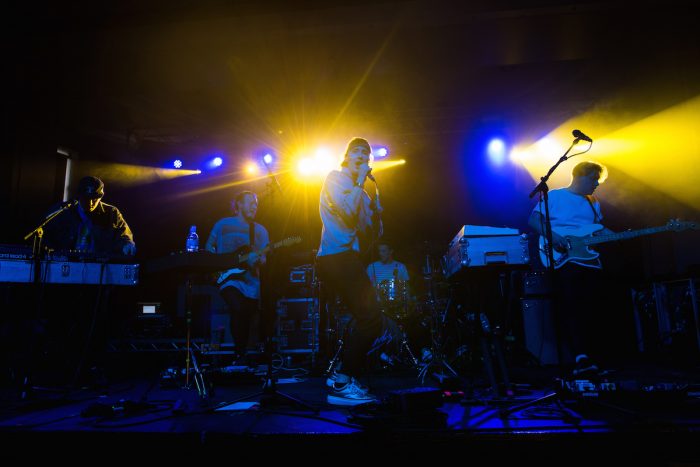 Another exceptional day at Live At Leeds discovering some of the finest new acts around as well as catching up with a bunch of old favourites.

Live At Leeds has long been established as one of the finest inner city new music festivals around, it draws on acts from across the country and beyond. This year is once again no different with an endlessly diverse line up, there is every reason to start your day off early in an attempt to sample every facet of the brilliant talent on offer.

Much like in previous years, our day starts at basement venue, The Key Club. Unlike previous years however, 200 other people have had the same idea, and the small venue tucked underneath the Merrion Centre is full to bursting as local lads Furr take to the stage. Effortlessly bridging the gap between Weezer and Queens of the Stone Age, the four piece veer from the melodic to the weighty in an instant; propulsive bass lines driving each track forward behind frontman Jack Byrne’s vocal yelps and screams. It’s clear that Furr are all competent musicians in their own right, but together they feel greater than the sum of their parts, a rich musicality bolstering their ability to twist and contort the dynamics of their set with consummate ease. They might be the first band of the day, but they certainly provide one of the day’s most memorable sets. 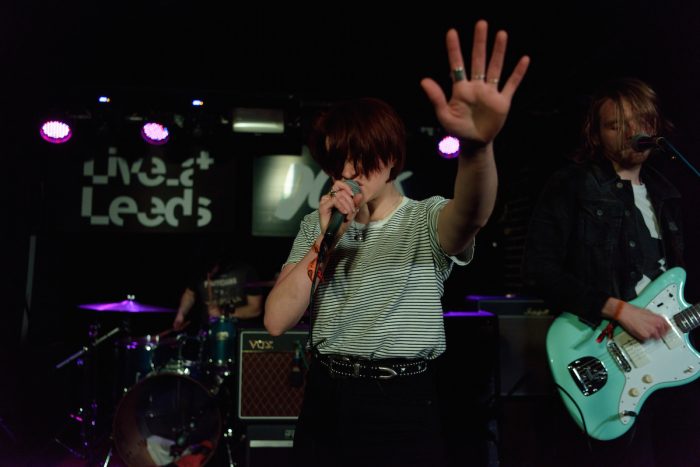 With an ever-growing line snaking around outside of the venue, we opt to keep our place in Key Club to catch another local band in the form of Dead Naked Hippies. Unleashing an instantaneous barrage of psych enthused post-punk the minute they take to the stage, the trio bludgeon a baying crowd with all-out aural assault of drums bass and guitar, while frontwoman Lucy Jowett’s vocal yelps puncture the walls of noise. A capacity crowd hangs on to the band’s every word, but one can’t help but think there’s something missing from the overall mix, a lack of depth which can’t be attributed to the band themselves and is unfortunately, a bi-product of these multivenue festivals. Still, we make a mental note to catch these guys on a headline show later in the year.

LIFE are arguably one of the most vital band’s on today’s line-up. Taking to the stage over at Leeds Beckett SU with daylight still streaming through the windows behind, it’s in direct contrast to the gloomy confines of the previous venue, but as the band announce their arrival through a squeal of feedback, any thoughts of time are shattered and their politicised garage punk takes hold. It takes what feels like a single track for the room to fill up, and when it does each member of the crowd’s eyes seem transfixed on the Iggy Pop esque frontman Mez as he flails and contorts himself across the stage. With a sound that falls somewhere between the classic punk of the Stiff Little Fingers and the anarchic verbal diarrhoea of Sleaford Mods’ Jason Williamson, the band encompass a true punk spirit, yet deliver it with an impressively contemporary flair. Recent single ‘Popular Music’ finds Mez within the crowd, yelping in the faces of those who’ve yet to find themselves caught up in the day’s first moshpit. It’s an antagonistic, and the crowd lap it up as the final squeals of feedback die down signalling the end of their set. Raw, uncompromising and utterly brilliant, expect big things from the Hull four-piece. 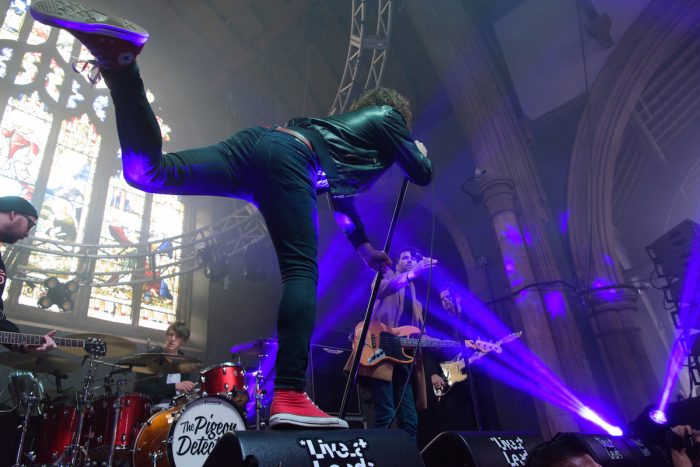 As we’ve already seen today Live At Leeds consistently supports the exceptional new bands coming out of Leeds and beyond. However, it falls to Leeds stalwarts The Pigeon Detectives to open one of the festivals newest venues Church, and with an over capacity crowd queueing around the block before the doors had even opened. This prompted tweets from the festival organisers to warn festival goers that if they weren’t in the queue they weren’t going to get in. With the venue fit to burst The Pigeon Detectives waste no time in riling the crowd, as they all chant and bounce along in unison. There’s a real party atmosphere from the off with the likes of This Is An Emergency and I Found Out featuring very early on, the crowd are almost louder than the band for the most part but this incredible set will go down in history as one of the finest Live At Leeds sets we will ever see.

Continuing the party at Church a spiral sign at the back of the stage the only sign of the rabbithole we’re about to fall down. Potentially one of the newest bands on today’s line-up, The Opera Comic have only been active for about six months, not that their set would have you believe such a fact. Huge swells of synth offer up an optimistic air to their set, while the rich chemistry of the five-piece is nothing short of palpable as they drop indie-pop banger after indie-pop banger, including previous singles ‘We Are the Freaks’ and ‘A Time of Hope’. It’s a refreshing break after the politics of LIFE, and offers up half an hour of intoxicating escapism, proving that, despite their short time together as The Opera Comic, they’re one of the strongest indie bands in Leeds at present. 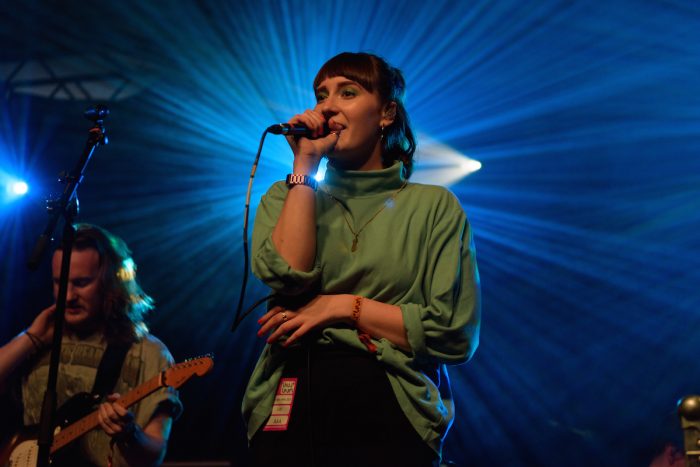 With two exceptional stages over at Leeds University Union it’s hard to ignore the calibre of talent over there, we first catch Tom Grennan who fails to impress on this occasion though. His attempt at Jamie T style bravado mixed with Ed Sheeran style singer songwriter vibes really doesn’t hit the spot for us. His bravado doesn’t match the delicacy of his songs in many cases. Fortunately, the same cannot be said for Fickle Friends who kick the party back into action with a slew of upbeat party tracks we’re instantly overwhelmed by their infectious happiness and incessant grooves. Natassja leads the charge for the band as the crowd sing back every word to Cry Baby and Swim, there’s a real passion in the bands set and they’ve drawn a huge crowd despite not yet releasing a debut album only a string of exceptional singles.

Another band on the cusp of releasing their debut album also sustain the party vibe, Clean Cut Kid have long been favourites of ours. Their insanely catchy heartfelt tracks have the ability to brighten up any day, and tonight even early on in their set they’re actively encouraging crowd participation. With tracks like Vitamin C, Felt and We Used To Be In Love you cannot help but be in awe of how excited the band are. Having had a very long day so far Clean Cut Kid banish all of our worries and cares and allow us to just enjoy the party for that little longer, this should be their year. 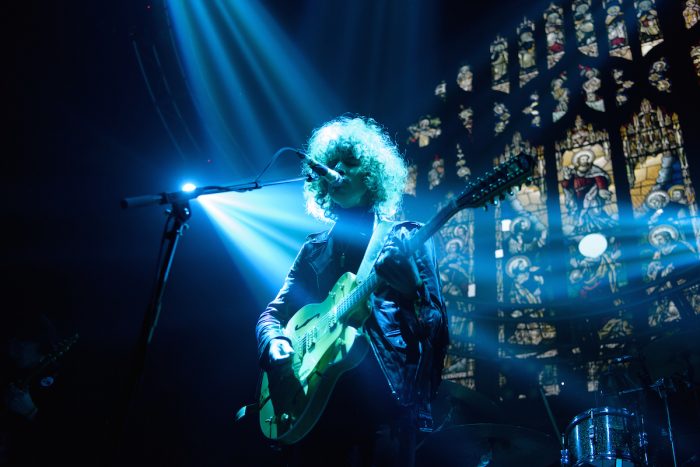 As the evening wears on the more established acts rise to the fore, Temples take to the stage in front of a packed crowd. The bastions of neu psychedelia put on an impressive show in this equally impressive venue, swirling hook-laden guitars underpinning James Bagshaw’s vocals. Their set packed with highlights like latest single Strange Or Be Forgotten and closing track for tonight’s set Shelter Song, this grandiose venue is the perfect place for Temples as they truly enthuse tonight’s crowd.

We close out the day with a trip to see a band who’ve impressed us on a number of occasions previously, Honeyblood are currently touring their raucous second album Babes Never Die. On record the duo often come across sanitised and in some cases over-produced, but live they’re a much more intense prospect. The ferocity and noise that the two of them create is deafening yet exciting, they tear through an impressive set including the likes of Babes Never Die, Ready For The Magic and older tracks like Killer Bangs. It proves the perfect way to close out a very long day at this years festival with a truly brilliant and exciting line up.

As always Live At Leeds never fails to impress, it’s diverse line up provides something for everyone. Today we merely scratched the surface compared to the number of bands that were on, but as ever we’ll be back next year to do it all again.

~
For more information about Live At Leeds check out their website here.

All words by Lee Hammond and Dave Beech, all photos by Lee Hammond. You can check out more work by Lee at his Louder Than War author’s archive, he also tweets as @Napzap.