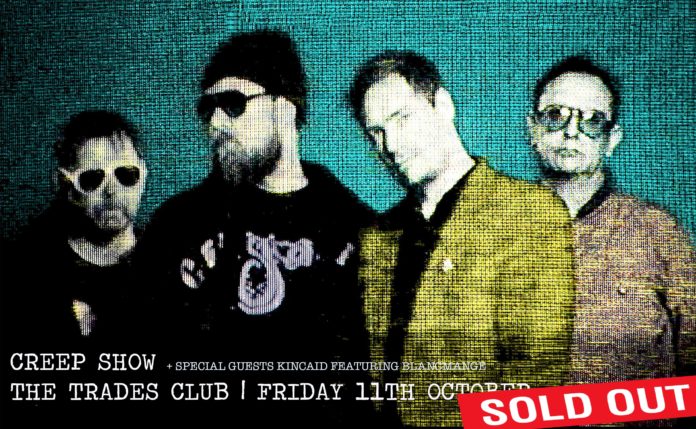 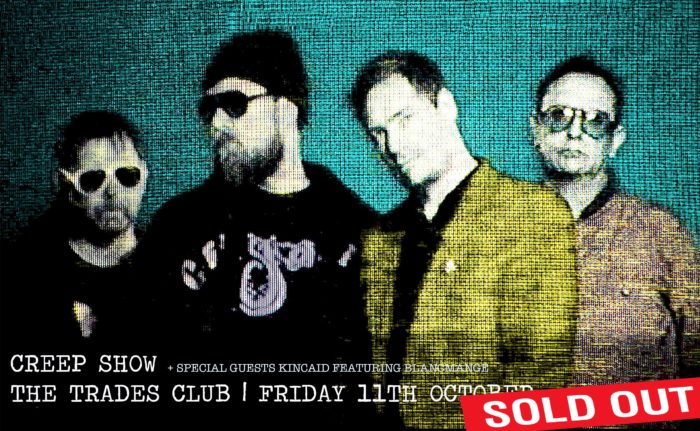 There was something very amusing about a twenty-four year old male telling his Dad to hurry up as the later chatted to fans outside the bar area of the Trades Club. The young man was Joe Arthur (aka Kincaid), his father Neil of Blancmange.

Up three flight of creaky stairs at the unassuming building on Holme Street is a room appearing like a cross between a car workshop and a church chapel, packed to the rafters with a sell-out crowd. There is an incredible feeling of anticipation and excitement as cask ales walk freely with their accompanied owners of all ages in the darkened room headed by a stage which appears to contain nothing more than a table and a raft of cables and wires.

Joe and a Neil Arthur take to the stage, dressed head to toe in black and momentarily seem to adjust and twiddle knobs before the opening bars of the new Kincaid single Late For Sum, begin to hit the air. The young, fresh face on the underground club scene has been remixing sounds for a plethora of artists of late and the opportunity to take up a support slot to Creep Show is a well-timed move. 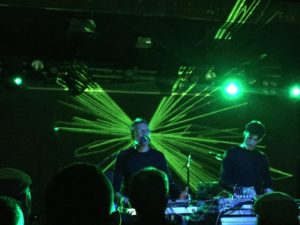 There’s a hard edge to the tracks which also contain previous single Big Fat Head (with all vocals performed by a bespectacled Neil), think somewhere between Orbital and Underworld and with a deep bass undertone and you won’t be far wrong. Glances to each other’s actions are commonplace as the LED lights flash on their torsos and in the background. It’s like Blancmange with a harder, clinical edge or, maybe it’s just the sound of Kincaid, who really knows?

Nods of approval are abound as the Blancmange classic, Feel Me becomes recognisable. It suits the updated sound and seems the natural progression from Happy Families to Happy Families Too to where it is now. Similarly, with two more Blancmange tunes – What’s The Time? and I Smashed Your Phone – which are also performed, working superbly well with the new arrangements and sound. Needless to say that they leave the stage to rapturous applause which could fully justify an encore, instead father and son look towards each other and embrace in a huge hug. It then becomes heartfelt moment for everyone and the prospect of more collaborations is indeed exciting.

The mini album, Late For Sum is available here.

Creep Show are something of an enigma. American alternative rocker John Grant teamed up with Wrangler who in turn comprise of Stephen Mallinder (Cabaret Voltaire), Benge (Blancmange, Fader, John Foxx) and Phil Winter (Tunng) make for an interesting prospect and deliver nothing less than a riveting set.

Opening with the title track from their debut album Mr Dynamite, it’s clear that this isn’t going to be any ordinary performance. Grant’s bluesy voice is a complete contrast to the off-the-wall backing and it seems to work perfectly. Obviously, there are hints of Cabaret Voltaire too, more so when Mallinder adds his own vocals, and the resulting set is positively perfect. Shouts of approval from certain quarters of the audience amuse the band and result in reciprocated humour.

Benge stands to the right of Mallinder and provides percussion for the evening, his fingerless leather gloves protecting his hands which must take a pounding as his thrashes out some superb drum patterns and Winter stand to the left of Grant almost hiding under a jacket and baseball cap making him all but invisible though clearly busy on more of the musical accompaniment. It will doubtless be said again but, Creep Show look like some modern day bastard sons of Kraftwerk, stood behind laptops and banks of cabling, they are often still (with the exception of Benge) and clearly concentrating on their work. Less conventional than the German pioneers, Creep Show blend electro with weird (see Pink Squirrel or Tokyo Metro) to a perfect end result. The performance is phenomenal. 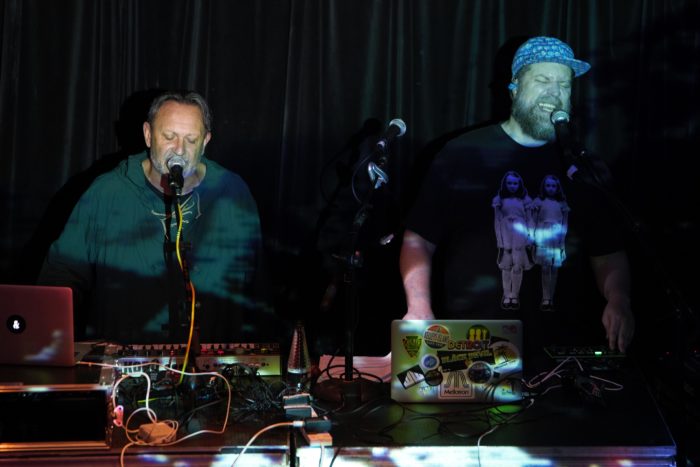 Vocals are shared, maybe unequally, between Grant and Mallinder and the juxtaposition between the two adds another dimension to the performance. Grant’s vocals on the superb Safe And Sound are nothing short of incredible through an hour long set that is faultless and clearly one of the finest gigs many of the audience have seen in a long time. Dancing (of sorts), foot tapping and general bodily engagement can be seen everywhere.

Inevitably, there is an encore, just one song but, when it becomes apparent that it is a version of Cabaret Voltaire’s Sensoria from 1984s Micro-Phonies, the place goes wild. Mallinder relishes every second and on its closing, the band leave the stage to rapturous applause. Creep Show are superb both live and on recording and, something not to be missed.