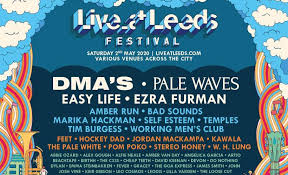 Live at Leeds returns with another impressive line-up, headlined by DMA’s, Pale Waves, Easy Life and Shame. The geography of Leeds City Centre is quite the benefit, as you rarely have too far to travel from venue to venue. Excluding The Brud. But anyone familiar with the what some cite as the best venue in the North will understand that the taxi or elongated walk up there is fully worth it.

Previous artists who have appeared at Live at Leeds in the early stages of their careers and gone on to huge achievements include Brits Choice Winner Sam Fender (now headlining arenas and released a number 1 album Hypersonic Missiles), Pop Sensation Sam Smith, worldwide festival headliners The 1975, online star Freya Ridings, Glastonbury headliner Stormzy, and Ed Sheeran, who recently returned to Leeds for the biggest headline shows in the city since 2006 at Roundhay Park.

Touring a new album and line-up, Temples return to Live at Leeds. The buzz band of the moment, Working Mens Club never fail to disappoint and are bound to put on a hell of a show. Charlatans front-man Tim Burgess will also perform with his solo project. Radio 6-tipped The Goa Express make their Live at Leeds debut. Feet, Phoebe Green and Fling bring easy listening indie-pop, perfect to have a nice cooling off beverage to, right before The Wytches, W.H.Lung and Dense make ears ring with their deafening, circle-opening anthems.

There is likely a handful of bands still to be announced, with the odd surprise lurking here and there. Take advice and PLAN your day in advance. Nothing worse than being at the front of a queue when the venue is at full capacity.

Third tier tickets for Live At Leeds can be purchased here;