Home Blogs Live Aid – the day that the music died. 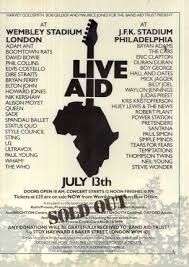 It’s 30 since since Live Aid so we have gone through the archives and found an old blog from John Robb about the music event that, arguably, ruined music for ever…

Can it really be twenty years since Live Aid hogged the TV and Phil Collins collection of helicopters to become the biggest music event of all time etc.

It would be churlish to argue with the motivation behind the gig or Bob Geldof’s getting off the settee moment of must do something genius.

Well we could, but we won’t.

It’s the spectacle itself as a galaxy of multimillionaires pranced around on the stage demanding your money to put on end to poverty in a breath taking display of missing the point. Of course backstage could have been buzzing with anticipation and deep conversations about saving the planet and feeding the world but we somehow doubt it.

The only other gig in london that night was my band the membranes playing the Enterprise – a gig so packed that the floor of the venue cracked and nearly crashed into the bar below. Of course that gig had no charitable intentions which at least made it honest.

Live Aid now seems like the pop establishment reasserting total control after the punk wars had finally been crushed. The pastel shades of corporate pop were now back in control with a whole host of pop stars old and new celebrating the mullet mundane of the mid eighties form on international TV.

Nowadays people talk about Live Aid as Queen’s moment- the great performance and gig that made them multi million stadium sellers and how they seized he opportunity which kind of misses the point of the whole thing.

Watching it now is a blur of expensive bands in the worst clothes and hair in pop history playing their mini greatest hits sets, a swarm of helicopters, paparazzi and royal handclaps with mid eighties pop bling that did the job and raised millions but ultimately is the day that the music died.