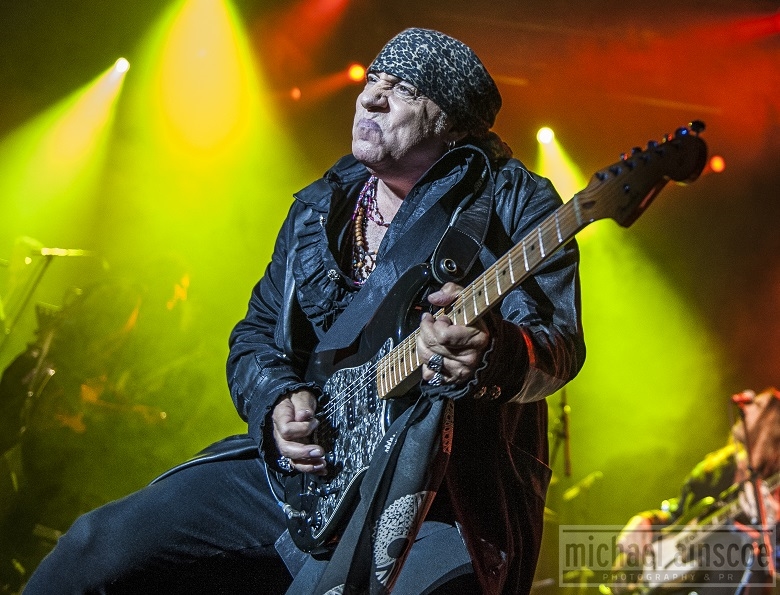 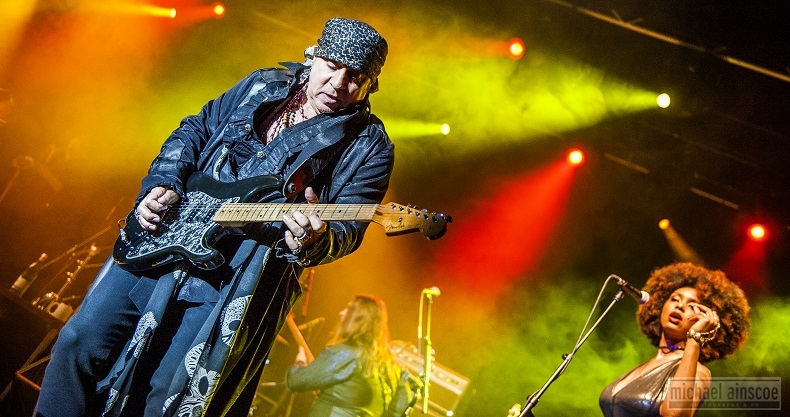 LITTLE STEVEN & THE DISCIPLES OF SOUL

Getting tired of living in a world that’s got no soul? Little Steven brought a huge helping of soul fused redemption to his only UK appearance, aside from a trip across the Irish Sea to Dublin, in tropically sun drenched Manchester.

A city that may have appeared  unrecognisable from his recent two trips to the city to play with Bruce Springsteen at the Etihad Stadium (tonight occupied by Take That)  which have been cloaked in the usual seasonal Manchester drizzle.

It might  have felt like Little Steven had sneaked in under the radar just like his Soulfire album, but ultimately  impossible  to ignore a Steve Van Zandt who’s  come  full circle and back to his roots. Having relegated his once high profile  political machinations of the Sun City period of the late eighties and his more recent acting ventures, not to mention returning to the side of his brother Bruce in the E Street Band where he’s always ready for the call, his heart remains in the horn drenched passion of the classic RnB soul sound. 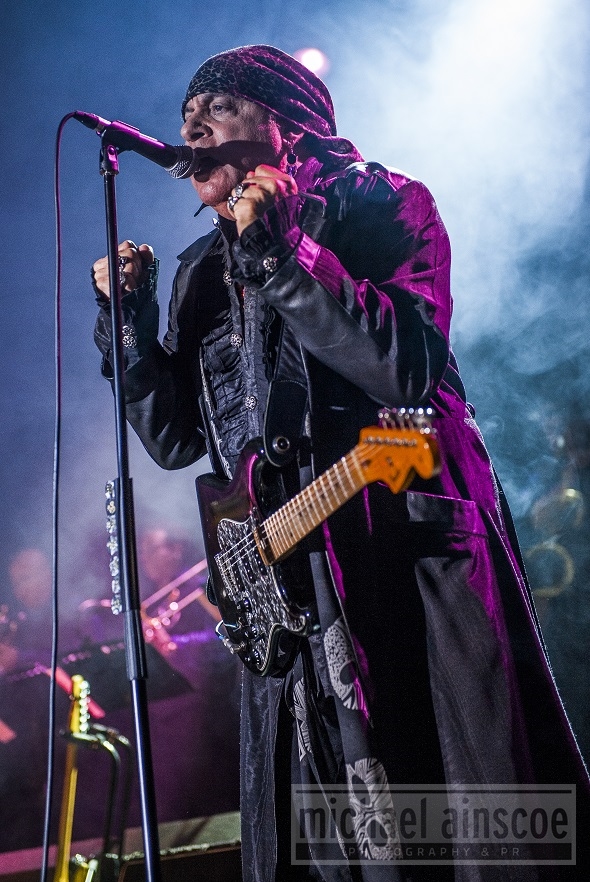 Almost naturally, there was a sharing of love for the people of Manchester – “been thinking a lot about you”- as he emerged in the  familiar but soon to be discarded floor length coat, bandana and jewellery; the raw  tone these days is a little more mellow and the  stern expression occasionally broke at the warmth not of the evening but the reception from the faithful (a change for him to hear “Steeeeeeve” rather than “Bruuuuce”).

His vast band of brothers and sisters included a five piece horn section and trio of foxy hicks who shimmied and swayed all night even matching the wonderful Shangri Las on St Valentine’s Day. Almost hidden by the fifteen in total on stage was Lowell Levinger of The Youngbloods who Steve namechecked during the night and a  band who  epitomised his  influences in a two hour, full on soul revue

The horns added an amazing punch, doing their stirring job on I Saw The Light, and in showcasing Steve’s songwriting and his unparalleled skill at the horn arrangements particularly for Southside Johnny on Coming Back and  Love On The Wrong Side Of Town. The early take on Etta James’ The Blues Is My Business came brazenly funked up and dripping with blues plus extended solos while the gem from the archives came in the form of  Gary US Bonds’ Standing In The Line Of Fire – “try working forty years without getting a hit – it’s how we keep our mystique!” – the Morricone sound from the new Jeff Beck model guitar.

A two hour journey through musical history, like a  random juke box shifting from one hit to another – covering  James Brown territory, the Blaxploitation funk of  Down And Out In New York City and then a run which had  a  reggae – ska – dub groove going on in the  trio of  Solidarity, Leonard Peltier and I Am A Patriot. Quite apt too  that he should encore with the fighting back, clarion call of Out Of The Darkness making a rare appearance.

A man of encyclopaedic musical knowledge and zeal who we sadly don;t get to see out doing his thing often enough. He  remains among the believers.