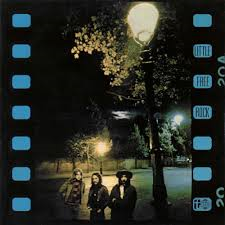 Remastered version of the Preston band Little Free Rock’s much sought after sole album originally released in 1969 on the Transatlantic Folk label, including an extended cover of the Creation’s Makin’ Time. Ian Canty hears Freakbeat and the emergent prog rock head on in 1969, with Peter Green, recently discharged from Fleetwood Mac, also making an appearance.

1969 was a pretty uncertain year for British rock music. After an almost decade-long period of leading the field through changing styles, now the US was in the ascendancy and most looked over the Atlantic for innovation. As psychedelia fizzled out, with the Beatles on the long road to an acrimonious split, Cream were probably the most influential British band with their Power Trio set up becoming the favoured style among outfits on what was now termed the progressive rock scene.

Little Free Rock conformed to this mode and the most durable stamp they left behind was not a musical one, but an image. A picture of the band sat on a phone box dressed in their post-psych finery, with the gas holders by Kings Cross in the background, being the perfect image to sum up UK underground rock in 1969 (to this end it was used on the cover of the recent and very fine compilation of the time I’m A Freak Baby). However, the band did have a bit more to offer than just being ’69’s fashion plates as we shall see.

Little Free Rock came together in the most unlikely way when Peter Illingworth, ex-guitarist of David John And The Mood (who had two singles produced by doomed genius Joe Meek and were previously known as the Fabulous Falcons), was fulfilling an engagement at the Preston National Union Of Railworkers Club. There he met drummer Peter Varley, who had followed Illingworth since his Mood years and was aghast to see someone he rated playing standards with a couple of old folk for a few quid and some free booze. Inviting him to join his new band to rescue him from this sad state of affairs, the initial six piece band Little Black Fat Pussycats slimmed down to a trio with the guitarist and drummer joined by bass player Frank Newbold so that LFR’s classic line up was in place, albeit under the name Purple Haze (the band insist this was before they heard of Hendrix).

Dropping the name when the Hendrix single hit the charts in 1966, Little Free Rock came into existence. From there they picked up an ex-art student manager in Eddie Sandham, who also supplied them with some flashy shirts and thus begun all manner of strange gigs. Among the oddest of these being an engagement being on the Merseybeat Cruiser, the Royal Iris, literally a ferry across the Mersey. Eventually they followed on the time honoured path of “moving up to the smoke” and ensconced themselves in South East London to record their debut (and only) album for the Transatlantic label.

It is that LP that we have here. The band have never been satisfied with it and you can sort of see why, although it is a perfectly good late ’60s rock platter. LFR had some great raw energy and a little bit of that is dissipated by the production (insisting on multiple takes and choosing the worst one in the band’s opinion) and some ill-advised use of strings. The remastering job has rendered the original record well, but can’t address faults like that. Starting out in archetypal fashion for the time with a massive gong sound, there is a Who-type relentlessness and near Freakbeat guitar on Roman Summer Nights and the following Lost And Lonely is some classic laidback late-psych hard rock.

Castles In The Sky has hints of those strings but also some neat guitar lines and a thunderous kettle drum beat which keeps it on track. In the late ’60s psych/prog there was a bit of an obsession with the mediaeval and the idea of “courtly love” (not the Hole singer), Act Of Chivalry chimes in with that being also the nearest we get on Little Free Rock to a pop song, almost a ballad really. Very pretty though and rather good too. The album ends with their version of the Creation’s Makin’ Time, which despite having a bit of a dull drum solo (but they were all the rage at the time) is pretty hot and a rip roaring way to bring the LP to a close.

After the album Sandham had the band hook up with Ginger Johnson’s African Drummers, which must have seemed like a good idea at the time, but lead to Little Free Rock’s long wind down. Through the dwindling returns of this collaboration, a glint of light appeared when Peter Green enlisted the band to work on his debut solo record after leaving Fleetwood Mac, but Ginger Johnson disastrously intervened and the sessions stayed in the can as a result. Little Free Rock eventually came to an end around 1974 having no original members on-board, with Paul Varley already having flown the coop to join late-glam hit-makers and TV stars the Arrows.

Though Little Free Rock were just one of a plethora of bands inspired by Cream and searching for their own style in the post-psychedelic landscape at the end of the ’60s, they approached their work with flair and energy. They had more than a few interesting ideas and mixed that with the pile-driving approach they refined during their days labouring away on the gig circuit. Though some of the production techniques may have robbed the band of a little of their natural rawness, their skill and road-hardened toughness is clear to see. Now the LP has gained a reputation through its rarity, but it still sounds good and surprisingly contemporary given the kind of sound displayed on the album has been back in vogue of recent years. So long after its original release Little Free Rock has finally found its niche.