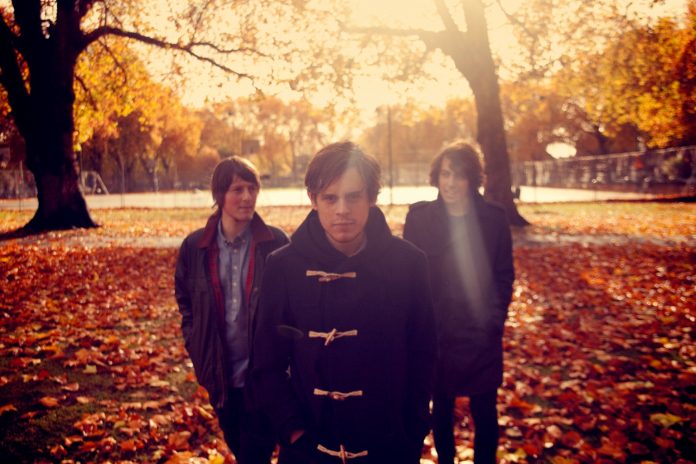 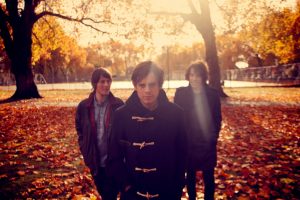 Last week Faye Baillie and Lucy Holt went to see Little Comets play one of their biggest shows to date at Manchester Academy 2. The Newcastle four-piece Little Comets talk about Frisbees, games and girls’ names. Here are their findings:

Lucy Holt: So you’ve been touring pretty relentlessly, how many motorway service stations have you visited, and which was your favourite one?

General consensus: oh deary me”Â¦ all of them?
Rob Coles: I must admit, we love playing the game tipping point, which is how many motorway service stations can you name? I thought I could name at least twelve, thirteen ”â€œ but I couldn’t.
Michael Coles: Well the idea was that”Â¦ it’s just a really bad idea to play with the band”Â¦
RC: Yeah you always end up losing about forty quid

The band decide on Weatherby as their favourite because, besides being “magical”Â, other legitimate reasons included that it was close enough to home, and the coffee’s not too awful.

Faye Baillie: Have you been up to anything in Manchester today?

Matt Hall: Playing Frisbee with a drum skin
RC: We arrived in Manchester at about four this morning, so we didn’t really get up until eleven, and we were staying a few miles out so by the time we got here it was pretty much time to set up
MC: But we do love Manchester
RC: Me and Mickey are both vegetarians so there’s lots of good places to eat, quite a few in the Northern Quarter”Â¦ We never seem to have a day off around Manchester

FB: Yesterday in the Northern Quarter, it was Record Store Day; did you do anything for it?

RC: I was in Newcastle yesterday morning and I heard about it on the radio, so it would have been too late to do anything musical, and I couldn’t get in any record shops in Newcastle, I couldn’t believe how big the queues were! I kind of bypassed them which was a shame, because, well we all really love vinyl, it’s such a great way to present music because it’s far more interactive than”Â¦
MH: and to support independent record stores as well, because a lot of people bypass them and go to HMV, which is cheap and stuff but you don’t get the kind of”Â¦ a lot of the time independent record shops will get sort of limited editions in masses, where as HMV so kind of, just CDs, and there is more vinyl”Â¦
RC: I’m always a bit put off to go into a record shop because”Â¦ I feel under qualified, like you go in and ask for something, and I remember going to Rough Trade in London and the bloke looked as me if to say “why are you buying that? You don’t look like the type of person that should be able to buy that music”Â

LH: It is quite intimidating

MC: Especially when you go to the ones in Newcastle and they do look at you up and down
MH: Also in record shops, they have an insane knowledge of music, but at least in a record shop you’re at least getting a bit of banter about what you’re buying, whereas on the other end of the spectrum you’ve sort of got your HMV”Â¦ actually I know some people that work in HMV so I won’t talk about it anymore.

LH: On your new EP, you’re still really wordy and lyrically based, so do you have favourite books, or certain authors that you love? 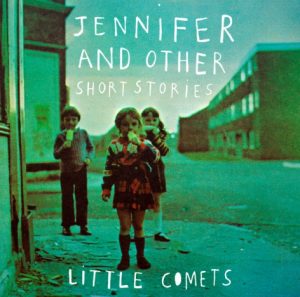 RC: yeah, just loads of stuff really, I pick up a lot of stuff”Â¦ and some stuff you pick up accidentally, like there’s this Czech author called Milan Kundera whose books are sort of philosophical, and his books just take ages to get through, because I have to read them with a dictionary, or have to re-read things four or five times”Â¦ And there’s this American author called Jonathon Safran Foer, I love the way he writes about objects, like really personal things, and his use of language is really interesting. When you read about authors as well, you find out about authors they like, and you read them to see where they got their ideas from, and you definitely pick up things accidentally too, and most of our lyrics come from books I’ve read. Most of the music that I like, I think I only really like it because of the words”Â¦

FB: So you talk about language being dead, and you’ve got a new song called Language is Over, which is obviously a common theme, but you’ve also not got two girls’ names titles, both beginning with ”ËœJ’, have you got any explanation for that?

RC: well we’ve got one called Mathilda as well”Â¦ I was thinking about this the other day as well, but then again Paul Simon has a song called Thelma, Chris Ray has a song called Josephina”Â¦
MH: The Beatles have Hey Jude, Michelle”Â¦
RC: but I think with Joanna and Jennifer they fit the syllables of the chorus, when I’m writing the song the tune will come first, and I’ll need to attach something to the tune, so the name’s quite easy, then it’s easy to build a story around the name, because you start to form a character in your head”Â¦ but then other things like Mathilda, there’s a personal story behind that, ”Ëœme’ Grandma had a sister called Tilly, and she lived quite a solitary existence, she looked after Grandma while the other eight or nine brothers and sisters went off and had their lives, and she never found any body so some of them are quite meaningless, and some of them are quite poignant

LH: I heard on the radio the other day, Mary is the most quoted name in songs…

MH: yeah that’s a good one”Â¦ Hey Jude ”â€œ that was just another one with a name in it”Â¦ (sings again) Mary
RC: (sings, yes they’re fans of singing apparently) Stop! We have to play this game where, there’s lots of songs that have stop at the start of the chorus, like “in the name of love”Â, or “playing with my Delirium”Â or”Â¦

RC: yeah, and “it’s happening again”Â, or “I’ll just dance the way I feel”Â, but hat you’ve got to do is say “stop”Â and get as many of the songs in without hesitating afterwards, and the world record’s like, six or something, so that’s if you’re really bored… or lonely”Â¦
MH: (yep, you guessed it, more singing) STOP!

FB: So, as well as an obsession with language, we also noticed you have really interesting fonts, on the instruments; do you draw the writing on yourself?

RC: oh yes! Mickey has these ideas where the instruments need drawn on again ”â€œ that’s fine for Mickey, but it just takes ages and ages and ages”Â¦ it takes about like, eight hours?
MH: quite a while, I think I must have started at seven
RC: but it’s nice, I’d rather have me do it, or Matt than pay someone to do it

LH: Can you release it as a font?

Little Comets: we did!
RC: it doesn’t join up though”Â¦ maybe we should do just words instead

LH: This summer, have you got any plans to go to the Olympics?

MC: I’ve got a friend who’s the travel manager for the hockey, so we might get some free hockey tickets
RC: we’ve been asked to do some gigs for the torch relay, so that might be a good way of trying to steal some free tickets

FB: have you got a favourite Olympic event?

RC: the Athletics I think, it’s pretty pure isn’t it
LH: yeah, it’s pretty straightforward (literally)
MH: I like the walking race as well; it’s really funny isn’t it
MC: yeah they’re really bendy!
MH: I don’t really like it as a spectacle; I just like it as a comedy event
RC: just sports that are really simplistic, not like shooting, I can’t be doing with shooting
MH: I quite like throwing events, like the javelin”Â¦ the shot put’s good, especially when you see all those massive Ukrainians”Â¦

FB: Do you have any festival plans in the summer?

RC: I think we’re pretty much just waiting for some of the bigger festivals to kind of pick us out
LH: you’re on the line up for Kendal Calling
RC: oh that’s right Kendal Calling! That’s a good spot

LH: And finally, could you sum up the Little Comets experience with a slogan?

RC: no (Little Comets laugh) my ”Ëœmam’ and dad used to do competitions where you had to come up with the best slogan, and I think I’ve got sick of it, sorry!

Well after the night’s performance it turns out there was nothing to be sorry about. Even though they were, perhaps a little intimidated by the large volume of gig-goers, mentioning that they had ”Ëœonly ever supported at venues this big’, they were energetic as ever. Once being described as ”Ëœeverything but the kitchen sink’, it is obvious they’ve had more than just a kitchen extension; with their new EP on the way, credited by supporting band 1975 as “fucking well good”Â ”â€œ released 14th May ”â€œ titled Jennifer and Other Short Stories, the Little Comets aren’t so little anymore.