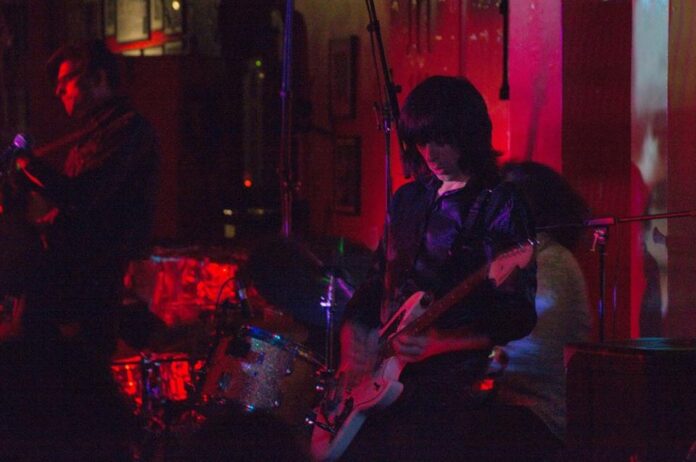 When the future of the 100 club was under threat a few years ago, it looked like yet another historic live music venue was due for the chop in this never-ending modernization and devaluing of the city’s musical history. Tuesday night however, the 100 club was in full force with the palpable excitement which waited for the musical offerings of the night ahead.

As I enter the dark red reception, door through door, down the concrete staircase I can feel the history of a thousand messy nights of gigs, beer and blood stained hangovers, and all proven by the graffiti on the dressing room walls. I can hear the pounding beats of support act Gil De Ray coming from the stage as I venture down.

I am greated by a jumping and dancing Gil, commanding the stage with his infectious bad boy energy. Serious, funky and hypnotic bass lines and punchy guitar riffs provide the landscape to which Gil gloriously and with sheer abandonment throws himself into. He is at home on stage and his having the time of his life.

Gil De Ray is a totally original artist hailing from Glasgow, who also has his heart in the visual esthetic of sound, making all his own music videos and is also providing mad voodoo projections for the whole tour.

His style is fucked up beats meets psychedelic soul and he raps and sings his way through an electrifying set. Just like one of his tracks, he proves himself to be a ‘bad mother fucker’. The sold out crowd are won over and the main act haven’t even appeared yet.

It’s hard to be objective when a band such as Little Barrie just keep coming into their own even more with each record.

The last album ‘King Of The Waves’ felt hard to improve on, but with the latest release ‘Shadow’ Little Barrie have pushed the envelope right out of reach. When any band channel their influences with such sophistication and intelligence it can only inspire.

The moments just before a band approach the stage are perhaps some of the most thrilling for any audience, let alone serious fans of the band, (of which there are many tonight) they greet the crowd to a rapturous applause and yelps, because we all know how good it’s going to be.

They kick off with the dark and threatening ‘Bonneville’ , the opening track from the new album . The crowd bask in its filmic glory and lyrical imagery. It is sexy and cinematic, as echoes of Can and Krautrock weave their way through the audience. Trance-like and sonically filthy the band head into ‘Sworn In’, an anthemic , melodic track with the unmistakable riffs and solos from Barrie himself. It has the glow and fizz of any 60s psych classic. Haunting melodies fill the 100 club as the huge crescendo of fuzz and reverb lead us to the skin tingling intro of ‘Fuzz bomb’.

Barrie’s guitar intro drenched in wah fuzz and sheer attitude leaves everyone weak at the knees, the guys too I may add . The track is pure raunch and no doubt belongs on an imminent film soundtrack.

The band are half way through a tour covering America the UK and Europe and it is fair to say that they have indeed hit their stride. I’m beginning to think this is one of the best Little Barrie gigs I have ever seen.  Having seen them thrill crowds over the years since the early days ‘Tip it over’ reminds us just how good they have always been.

Virgil Howe has got to be one of my all-time favourite drummers. Personality, talent and groove . Tonight he is like Jaki Liebezeit on steroids and he is taking no prisoners.

He hits hard and plays with passion and percussive swing and is the ultimate Drummer for Little Barrie, he provides the hypnotic beats to Barrie’s soaring guitar perfectly.

Lewis Wharton is the picture of cool sporting a new hairstyle and looking quite the quintessential bass player, there was not one note out of place, he is understated and always on the money. He is a classic bass player, channeling Jameson for pure soul and feel and Carol Kaye, when the edgier tracks call for a pic. He can do both with verve.

The band are playing out of their skin tonight, I cant remember the last time I ever saw three people have such a tangible energy between them. You can hear it on the record and you can see it on stage, not something every band can lay claim to.  Little Barrie are one of the most modest bands out there, so you have to see it for yourself. They are brothers, musicians, a real band.

The set is heavy on the new album and the band are more than that gig fit to say the least.  ‘Pauline’ rips the place apart.  Barrie’s epic  fuzz fury and melodic reverb are synonymous to his own style, yet hauntingly reveal a love for Danny Kirwin and Link Wray.  He is electrifying and is one of the finest guitarists to come out of the UK, ask anyone, but more to the point, listen for yourself.

‘Realise’ with the hypnotic dissonant bass of Lewis and Barrie’s arresting guitar stabs has the audience in psychedelic meltdown.  There are traces of Can’s mushroom head before it goes into full sonic onslaught.  We are brought back down to a mellow vibe with “Eyes are Young”. it’s sexy and sultry and has all the intensity of driving long into the night with escaping on the mind.  If notes were emotions it would feel like victory.

The band give us more from the previous album with new “New Diamond Love” and “King of the Waves” both classics.  By now, the audience who are by far one of the most attentive London crowds I have seen in a while are screaming for more and with that wry knowledge that the band are of course going to do an encore, wait with pure joy.

‘Black mind’ and ‘I can’t wait’ from their previous album absolutely kill it, there are no less audience members now than there were at the beginning, another rarity.  After playing, like the true gents they are, hang around to sign autographs and meet fans for photos, why this band aren’t headlining every festival this year I don’t know but if you saw them live you would understand. Not everyone “gets” the best stuff. But the cool people do.

As I leave, I think to myself yeah, that was in fact the best Little Barrie gig I have ever been to.  Even though I’ve seen the band so many times, I can’t help feeling like tonight I saw something pretty damn special.  In their own words, they left that crowd demonized…