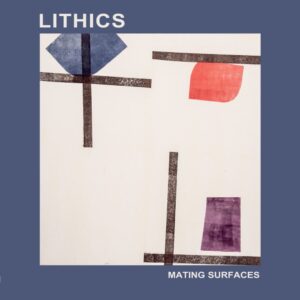 Louder than War’s Ioan Humphreys gets a preview listen to the awesome LP by Lithics.

‘Mating Surfaces’ is the second full length from Portland, Oregon’s Lithics, and their first on Kill Rock Stars.

Lithics are Aubrey Hornor on vocals; Mason Crumley’s on guitar; Bob Desaulniers’ on bass and Wiley Hickson on drums.  Lithics have far ranging influences including dance, noise, post-punk, punk and most strikingly, the early 80s NY Lower East Side No Wave scene that you can hear in their dissonant, and disjointed oeuvre.

Lithics create a world that seems like it is collapsing as it is being built.  ‘Mating Surfaces’ is an unnerving sound, but total in its commitment to a specific vision. It’s DIY minimalist art-punk that speaks to the fact that whenever someone says the underground is dead, it just demonstrates that they are just too past it to know any better.

Lead track ‘Specs’ off this impressive debut has a great bass riff, noisy cymbal heavy drums and spiky atonal (jazz infused!) guitar that goes wherever the fuck it wants. The brilliant monotone vocals from Aubrey Hornor just make this 1.44 an absolute post punk joy that sets you up for the rest of the LP. Oh and it reminds you that from just this one track, you haven’t heard anything quite like Lithics this year or last. And across its twelve tracks, ‘Mating Surfaces’ doesn’t hold back anything and there is absolutely no filler in there at all. It’s an impressive debut for Kill Rock Stars, and Lithics are one band that you would be a fool to ignore. Listen to it now!

Watch the video for “Specs”

June sees Lithics touring with Stephen Malkmus and the Jicks in the US. However, they will be over in the UK later this year.

Lithics can be found via their label, Bandcamp and they tweet as @lithicsband.