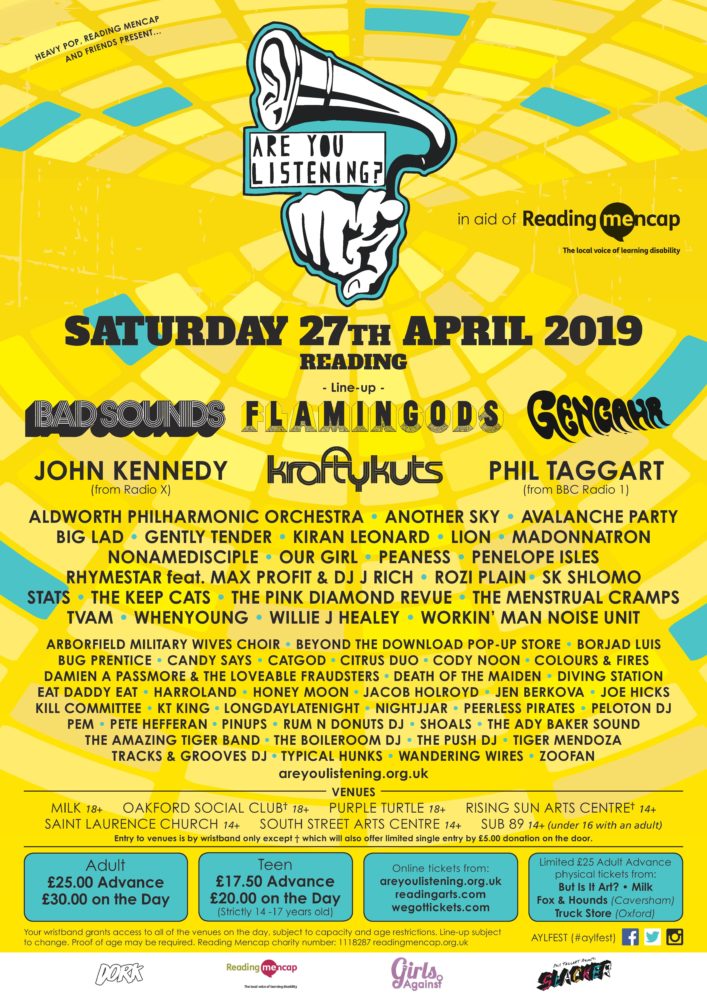 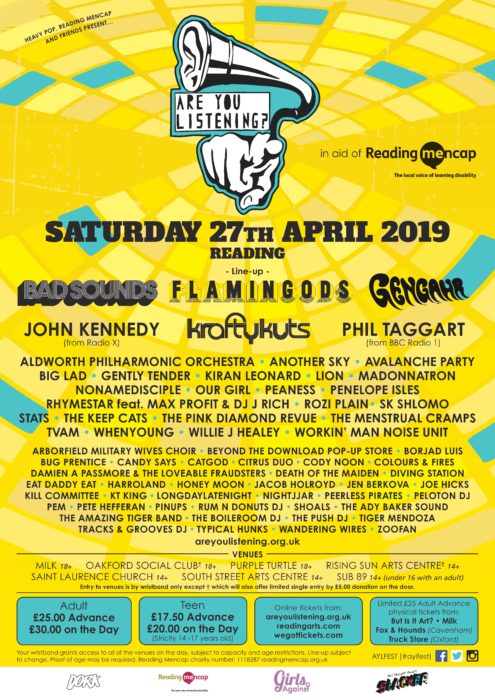 Reading’s Are You Listening? festival takes place on Saturday April 27th 2019. Raising money for the Reading charity MENCAP, this one day fund-raiser is now in its seventh year and its an annual event that we recommend highly.
Keith Goldhanger highlights ten acts from the dozens appearing that you may like to have a look at.

If spending a whole day in the centre of Reading watching local bands as well as up and coming acts from outside the area playing across the towns’ small venues is your thing then you may like to consider joining us at the end of April for the annual Are You Listening ? festival. Not only that but it’s also for a good cause. Reading MENCAP is a local charity that is affiliated to, but does not receive financial support from the Royal Mencap society. Last year the event raised over £13,000.

Here’s ten acts that we feel you may like to consider having a look at and if other years events are anything to go by we expect to get home having found a few more bands that we were unaware of previously.

Sit back, put your feet up, hit the play button and digest these tunes whilst we say a few words in anticipation.

WHENYOUNG
The Irish trio have a bunch of songs you’ll struggle not to enjoy, always great and highly recommended if you’re looking for some powerful riffs and bouncing anthems that you’ll just want to listen to again once you witness this band live. A band you need to see now if you haven’t yet done so.

STATS
Stats arrived a few years ago now and have recently released their début album Other People’s Lives. One for fans of LCD Soundsysytem or Talking Heads. A band you’ll find yourselves shuffling your feet too before swinging your arms around with much abandon.

TVAM
One man band with a big telly and a guitar. Joe Oxley’s debut album Psychic Data is an album that is difficult to put down. Time for another look.

AVALANCHE PARTY
These will entertain and you’ll probably find yourself standing next to the singer who tends to go walk about during the bands show. Raucous, intense and loud.

FLAMINGODS
We expect a cacophony of rhythmic beats and a riot of world music made by blokes with more equipment than the average stage usually allows.

PENELOPE ISLES
This Brighton band have a début album out this year on the wonderful Bella Union label. Another must see band with gorgeous harmonies and sweet guitars that’ll have you swooning with delight.

BIG LAD
Last time we saw these they performed on the dance floor surrounded by electronics and drums and making a racket that had the whole room enthralled. One not to miss.

ANOTHER SKY
It’s Catrin Vincent’s voice that has the world staring open mouthed at this London four piece, Another Sky are one of those bands that seem to playing everywhere in 2019 so seeing them here could be the start of a lovely long term relationship.

GENGAHR
Now two albums old and hailing from East London’s’ Stoke Newington this is a great opportunity for those who haven’t got around to witnessing these yet to make an acquaintance.

BAD SOUNDS
loveable foot tapping monster tunes that you won’t be able to stand still to.
Of course there’s load more on show other than the ten listed here. Get there early for some dinner time surprises and possible introductions to bands you’ll still be listening to in few years time.

Words by Keith Goldhanger. More writing by Keith on Louder Than War can be found at his author’s archive. You can also find Keith on Facebook and Twitter (@HIDEOUSWHEELINV)