Keith Goldhanger reports on what he saw at this years Are You Listening ? Festival that took place in Reading.

A day after this annual event we find ourselves struggling yet again to get through the crawling traffic on our way home. Thousands of runners are making their way around the 26-mile London marathon route and raising money for charities across the UK. Reading’s annual Are You Listening? Festival is the equivalent for those of us who would rather enjoy downing pints of lager whilst watching a selection of the many great acts we have based in the UK nowadays. Both events take place over the same weekend, therefore it would be a struggle to attempt to do both. We do still train for the last weekend of April, but we do it differently.

This event has managed to raise tens of thousands of pounds over the past seven years, and for those of us who have never wore a pair of running shoes in our lives it’s an excuse to attend an event we love whilst knowing that the money we’re spending is going towards Reading Mencap. This charity is separate from the National Mencap charity and therefore needs to raise money from fund-raising events such as this around the area.

We’ll always feel guilty for missing some bands, we can’t see them all. We are often met with the curious sight of some of our now favourite bands playing early on in the day that we missed, but this can be offset by seeing bands creeping up in the pecking order that would otherwise spend their lives being ignored, whether good or bad. And it’s healthy to stand in front of bands that we feel may be rubbish. It gives us something to chat about when they suddenly provide us with an absolute banging tune that can’t be put down at a later date. There’s a thousand words that can be written on that subject but not today.

WHENYOUNG  (top photo) have always been great from the first time we crossed paths and must be the only trio in the business with four members. We’re not sure where the fourth member came from, but it makes no difference to what we’ve seen or heard previously from these rousing 90’s indie anthem specialists from Limerick. This is a great start for any of us who have arrived a few hours late today and we feel this band are one of those destined for much bigger occasions as the next few years go by. Never Let Go is a tune they’ll play one day just before the encore and just before some fireworks. Every song is a refreshing arm waving inspiring racket that already has a few of us singing along. A few more like this and late-night summer appearances could be the order of the day.

Beth Lowen is a singer songwriter who performs as LION. You’ll need all this information if you want to find her, or click here. Her voice will captivate any listener who stands in front of her and the few tunes performed by the four-piece are also top quality that we feel the world will shortly embrace in a large way. Here’s a good place to begin if you haven’t heard Lion yet (and at least one of us had not until today).

Off down the road to the day’s third venue St Laurence Church, where ANOTHER SKY, who have already had national TV exposure on Jools’ telly show (or ‘Later’ as it says in the TV Times because that’s when we say we’ll watch it but never do), have us marvelling at the incredible voice (and lyrics) of Catrin Vincent which at times can be compared to that of Johnathan Higgs of Everything Everything. It’s a show that seems perfect for the venue we’re standing in as it also does for STATS , who follow simply by plugging in their huge array of equipment and taking off with tracks from their fabulous début album Other People’s Lives without a run-up. Frontman Ed performs like a Jim Henson puppet singing lyrics comparable to Russel Mael (Sparks). It’s certainly a highlight of the day that has those in attendance slipping on their dancing shoes as daylight fades outside and just before we venture off towards Reading Arts Centre, where we know we can flip between more than one venue to witness fresh names that we have to look on the posters to name as we exit.

JACOB HOLROYD is playing in the Studio venue as we enter and is one of those chaps with a guitar plugged into a tiny amp and a collection of songs that are instantly lovable. His online tunes we have investigated on our return are impressive, catchy and are refreshingly accompanied by a full band. His mates are also in attendance, not just to support him but to display their love for this guy’s music. There may not be many standing alongside us, but it’s not easy for any act to get their mates along not just once but again to sing along, as we all do after listening extensively to our favourite acts over time. It’s difficult to explain why just one person with a guitar can sound better than the next, but the songs we hear this evening are the difference. A name to keep an eye on.

Ten seconds down the corridor (we didn’t time it) ROZI PLAIN keep us entertained with some well-arranged, unusual tunes that we can’t turn our heads away from. This music in these surroundings is ideal. We discover she’s now about five albums old and is totally in charge of this room, totally in control of the unique laid-back tunes we’re engrossed in and it’s lovely. It’s the opposite of what we’ll see later on when we cross paths with Avalanche Party. There’s loads going on up on the stage without it being in your face. Delicate vocals, controlled percussion that stays in the background and synth lines that relax us and don’t make us feel the need to dance too madly. We leave wanting more and in praise of a bunch of people performing such original pieces of audio on their own that sound as though they have been created without a radio switched on in the background. In terms of the London Marathon, it’s like the bit where the runners pop into ‘spoons just by Tower Bridge to have a quiet pint and a packet of crisps – and on the subject of beer, the venue is serving beer in 100% compostable & biodegradable tumblers which is certainly worth mentioning and photographing (right). 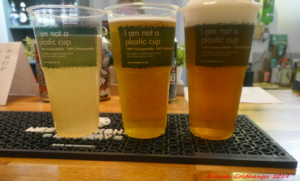 TVAM back at St Laurence Church is all a bit of a racket. The TV screens look good, but the barrage of noise has us scuttling for our schedules to try to establish the whereabouts of The Purple Turtle where AVALANCHE PARTY (below) are taking another step towards winning the most raucous band in the UK award. Shirt off, singer standing amongst a mad crowd going as ape as humanly possible, some of them still holding onto their pints, reminding us it’s suddenly become a Saturday night and songs that hit you inthe head like a rocket can sound ace on a Saturday night. Perfect music for a venue such as this and at a time of day like this. This band probably play loads on Tuesdays too, but you can’t beat 10:15 on a Saturday night. Go and see them any night of the week and remember that by the time you know all their songs you’ll get to experience a half hour like we have here this evening on the greatest night of the week (if you play it right). 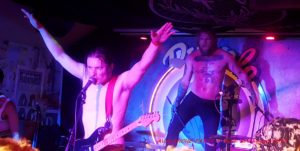 Back at The Oakford and it’s time to catch BIG LAD who are performing in the space we would like to be occupying ourselves, which is great if you’re one of the two dozen folk that are happy standing amongst the mayhem but a pointless exercise for those of us who have been on our feet all day and wouldn’t mind something to look at to complement the sometimes glorious racket we’re hearing. In a nutshell, we feel that this band are not as good as AK/DK, who have a similar line up and performed one of this festival’s all-time highlights a few years ago. Sooner or later this duo may have to use the stage as stages were intended to be used for. A great spectacle for some but accompanied by some tutting and the upwards nodding of the heads for those at the bar further back, who will maintain this position now and not go home until they’ve persuaded the DJ to play The Rat by The Walkmen.

Now that’s what I call a Saturday night out in Reading.

Come with us next year.