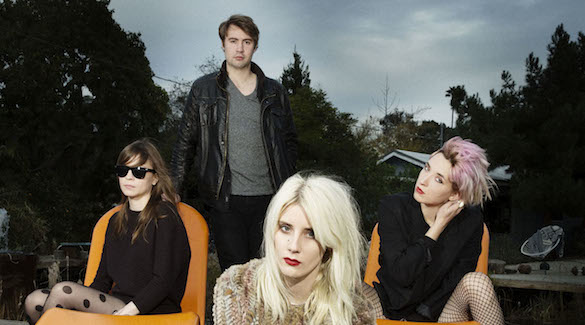 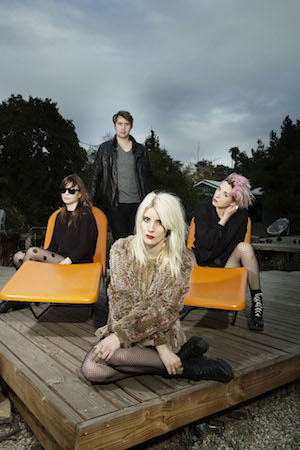 Next Monday White Lung will be releasing a new 7”, Drown With The Monster, on Domino and as a taster you can today stream the B-side, Snake Jaw, which came out yesterday (see below). Also below you’ll be able to find more details of the imminent album, Deep Fantasy, which is due out on June 16th via Domino and on which the track is also featured.

White Lung have been fast coming up on the rails as a band to watch out for ever since last years Sorry (which we reviewed here) dropped to impressive reviews across the webosphere. Our review concluded “Nineteen minutes of near-perfect post-punk hardcore for the here and now” and early intimations in the form of a first teaser track off the album, Drown With The Monster, released a couple of weeks ago, confirmed that they’ve lost none of the spunk and vim from those earlier days despite their rolling now as three-, as opposed to the four-piece they were when they recorded Sorry.

Deep Fantasy was made primarily in Vancouver with producer Jesse Gander (who also did both Sorry and their 2010 debut It’s the Evil) in just two, ten day-long sessions at the end of last year and the start of this one. William handled bass duties on Fantasy while Wax Idols’ Hether Fortune will take up bass and backing vocal duties on tour for the foreseeable future.

Way is more provocative and melodic than ever on Fantasy, lyrically surveying addiction (‘Drown With the Monster’), body dysmorphia (‘Snake Jaw’) and sexual dynamics (‘Down It Goes,’) amongst other dinner table topics. Kenneth, a devotee of Johnny Marr “plays with the speed of an 80s hardcore dude” whirled in Vassiliou’s relentless and seemingly effortless approach to drumming.

The album can be pre-ordered HERE.

Which brings us back to the new single,‘Drown With The Monster’, available digitally and on limited edition 7″ through Dom Mart from April 28th. Pre-order via Dom Mart HERE and buy via iTunes HERE.

“That song’s about body dysmorphia and its residuals. I feel like there are two women battling in my head sometimes: my completely confident self who can tell anyone to fuck off at the flick of a finger, and this other woman who hates herself, her body, and her mind, not because she actually hates herself, but because she has been told by her culture to hate herself for not being MORE, BETTER, THINNER, PRETTIER. Being crippled by a hatred for your own body—why? How did that happen to our fucking culture?”

White Lung are on the road in May with four UK dates so far lined up:

Now check out the stream: