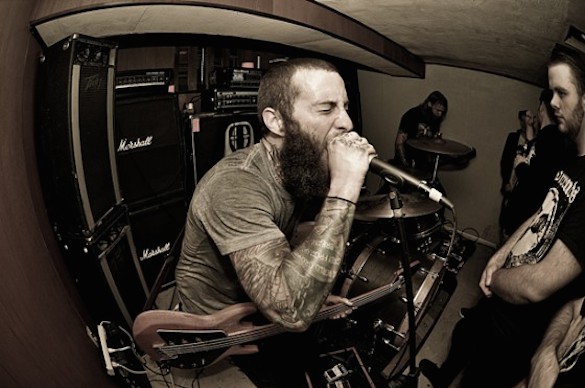 Who fancies something devastatingly fierce on their bank holiday Easter monday? Something that’ll hit them in the gut like a ton of bricks? Read on if you, if not, well, go have another egg or something. I dunno. Whatever it is you like to do on national holidays and that isn’t listening to bruising, intense, white knuckle fury.

Still with us? Good.

So, North Carolina-based Torch Runner have recently signed to Southern Lord, home to all the best experimental heavy metal, doom, stoner rock, grind, hardcore and sludge. If skull crushing chaos and chest rattling breakdowns are your thing, then Southern Lord’s probably a label you know (and love) well already. It’s a rite of passage for some bands, but for many it’s a destination, an endpoint – a goal even. Whether that’s the case for Torch Runner I dunno, but one thing’s for sure – they’re a perfect fit with the label.

There are two Southern Lord albums from Torch Runner in the pipeline, the first of which is Committed To The Ground, an album seasoned fans of the band will recognise as Torch Runner’s debut, previously only available in a limited vinyl run. It will now be made officially available worldwide on CD and digital formats via Southern Lord as a precursory title preceding the band’s recently-completed new LP, which will hopefully be released later this year.

One of the tracks off Committed To The Ground was “fired into the public” the other day via Toxicbreed’s Funhouse. It’s the album’s third track, “Feeding”, and you can check it out in all it’s powerful glory below. A tad over one minute long it wastes no time at all by cracking off at a blistering, intense rate of knots with riffs a plenty and blastbeats equally so. It’s a headstrong 67 seconds that rips from start to last leaving you gasping for air.

The accompanying press release says about the album:

“Committed To The Grounddrops twelve tracks under twenty-three minutes, viciously bringing forth a volatile brew of metallic, downbeat punk / hardcore / grind for fiends that are into filth like old Napalm Death, Dead In The Dirt, Weekend Nachos, and Nails, and is set for UK / EU release on May 12th.”

Check out Feeding below and under that the full track list and links for the band.

Committed To The Ground Track Listing: