Home Music Bands Listen To This: Two New Tracks by Hop Along – the Philadelphia-based... 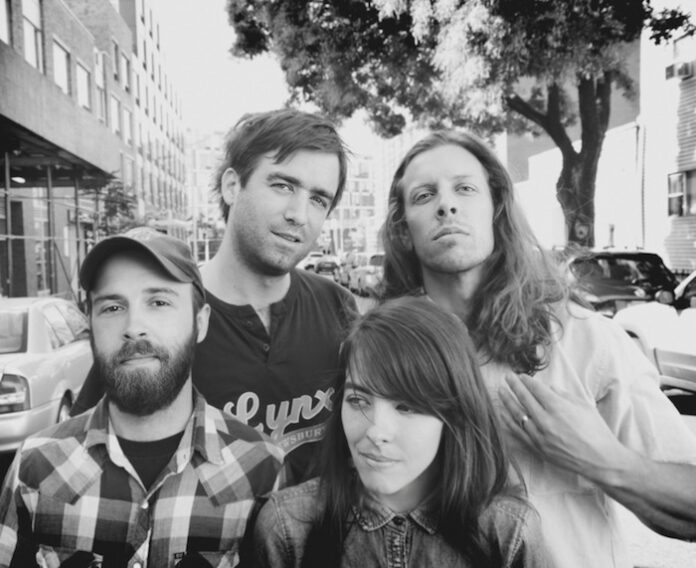 Philadelphia’s Hop Along will be releasing their second album, ‘Painted Shut’, on May 4th via Saddle Creek and we think you’re going to like it. We certainly do, which is why we’re sharing the first two tracks off it.

The newest track’s titled Texas Funeral and you can hear it above. It showcases singer Frances Quinlan’s (the sole original member of the band) astonishing vocals as well all the other tracks on the album do in fact. They swing from a quiet, throaty hush to a screamed, exultant yelp in the blink of an eye and without a doubt they form the focal point and main talking point about the band (with apologies to all the other band members).

At times I’m reminded of 10,000 Maniacs when I listen to Hop Along (who, coincidentally, have a new album out very soon which sounds nothing like Hop Along, or, indeed, themselves even from the mid to late 80s which is the ‘Maniacs era I’m thinking of.) I expect fans of Pixies will dig them too and at this point I’m minded to muse on how good a record Surfer Rosa could’ve been in Frances Q had been doing vocals on it…. Actually, I imagine all your favourite records would be better if Frances were doing vocals on them now I come to think about it. Except maybe Jane Doe I guess.

But that’s enough musing on might have beens when we should be talking about what is’s, which is the music Hop Along are creating at the moment. Or in the recent past anyway – the two tracks topping and tailing these words.

Hop Along are at the intersection of folk music, rock music and power pop, making compositions that are full of emotion, honesty and spareness on the one hand and brazen, bold, rock outs on the other. They kind of mine the loud / quiet aesthetic without your realising it as there’s always tension in their sound, whether it’s explodey tension or restrained tension. Their music is just enough on the catchy side of quirky that I can see people who otherwise might have been put off by Hop Along not being so. Which is great, because Hop Along deserve to be more well known. Much more well known. And on that note here’s a clever sign off (if not great use of the English language): get to know them more well yourselves right now by listening to the two tracks on this page again. Hola!