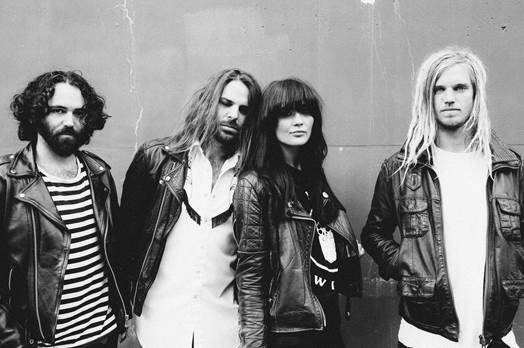 Psych-Blues outfit Saint Agnes celebrate the forthcoming release of their brand new single by providing LTW with an exclusive playlist of songs the band are currently digging.

Since their formation in 2014,  Saint Agnes have released three sell out singles, a live EP and cemented their place as London’s most exciting live band and with the forthcoming release of their new single ‘Merry Mother Of God Go Round’ (Death or Glory Gang Records) the band are set to see their star shine even brighter.

Entitled ‘The Coven’ the playlist takes in massive riffs, anthems and distorted vocals. Here’s Kitty from the band explaining the choices:

Because who doesn’t want to go to the disco? The organ on this song is tasty.

Makes me want to take off all my clothes and throw flowers at people.

We’ve just supported these guys on some of their UK tour. Babes, all three of them. Haunting, Californian gothic dreaminess.

Call Me in the Day, La Luz:

I listen to La Luz when I’m headed to the beach for a surf. Puts me in a sunny frame of mind and then I step into the Atlantic.

An anthem. I’ve been singing this at the boys in my band in the van; they really love it.

I listen to La Luz when I’m headed to the beach for a surf. Puts me in a sunny frame of mind and then I step into the Atlantic.

Shannon and the Clams

The distorted vocal is a dream. And I’m a sucker for doo wop particularly when it’s got a fucked up vocal on top of it.

I played a show with this band a while back and I was blown away.

Cheeky! This is my favourite Lola Colt song. And Gun deserves to be in the coven because she has a sensational voice and i love it.

Listen to “The Coven” below;

Saint Agnes will soon be playing the following gigs: