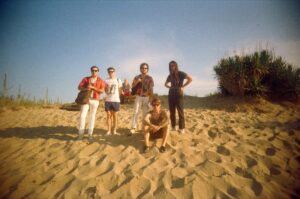 “This recording is at the apogee of scuzz,” sings John Dwyer, the psych-punk psychic warrior at the helm of the ever-changing ever-evolving musical group currently called OSees. “Punk anthem amulets for your ears and heart,” he continues in this short sharp 94-second shock to the central nervous system bearing the ironic title Dreary Nonsense.

It’s nothing of the sort: it’s an urgent call to arms; a “field recording from the pits”, a “quick booster between protein pills and recycled sweat beverage” – and a passionate plea for “respect and a peaceful life for all.”

It’s also the first taste of a new album to be titled Protean Threat by the genre-spanning band formed in 1997 in San Francisco (now based in Los Angeles) who have changed names almost as often as musical styles and band members, getting through 14 members over the course of 23 albums in as many years.

Earlier this year Osees announced updated UK tour dates. Initially planned for May to July, the UK and European tour was postponed due to  COVID-19. Throughout November the band will be performing in 15 dates across the UK, Ireland, France and Germany.