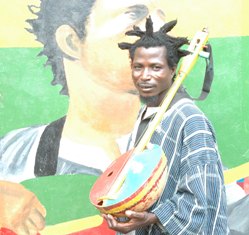 With his gnarled voice that takes the Howling Wolf blues back to Africa and his brilliant and dextrous playing, King Ayisoba deals a rough and raw mystical music.

Born in 1975, Albert Apozori a.k.a. King Ayisoba is a musician from Bolgatanga in the Upper East Region of Ghana who plays the ‘kologo’ or ‘kolgo’. Ayisoba (meaning ‘landlord’) has 14 siblings from his father’s 3 wives. A couple of his brothers are part of his band. He sings in Frafra, Twi and English. King Ayisoba considers Terry Bonchaka, hiplife artist who passed away in 2003, his mentor, as the former helped him into the music limelight. While working with Terry Bonchaka, he wrote or composed songs and played the Kologo music while Terry did the raps. King Ayisoba’s track ‘I want to see you my father’ topped the charts in Ghana in 2006. It subsequently won the most popular song of the year at the Ghana Music Awards.