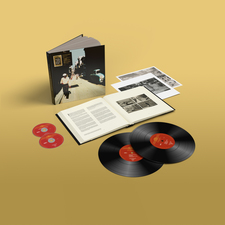 A quarter of a century ago a group of elderly Cuban musicians who had been silenced since the revolution that brought Castro to power 35 years earlier burst into the musical spotlight.

The album produced by Ry Cooder became the biggest selling ‘world music’ record of all time – eight million copies so far – and the film by Wim Wenders was a huge international hit.

Together they brought the forgotten music of Cuba from half a century earlier to the world and lit the spark beneath a wider trend for World Music. And it’s no exaggeration to say they boosted tourism to the Caribbean island that had long  languished under the shadow of a US trade embargo against Castro and his Communist regime.

This is the first of several previously unheard tunes from those historic sessions, selected by producer Ry Cooder and executive producer Nick Gold for the 25th anniversary re-release of the remastered album.

Vicenta is a vocal duet between guitarists Eliades Ochoa (the one in the cowboy hat) and the late Compay Segundo, who composed the song which tells the story of a well-known fire which destroyed Ochoa’s home village in 1909.

Like the rest of the original Buena Vista Social Club album, it was recorded when Cooder and Gold assembled an impromptu group of Cuban musicians at Centro Havana’s historic 1950s EGREM/Areito studios on 26 March 1996. The majority were celebrated veterans of the golden age of the Cuban music scene of the 1940s and ’50s.

No one could guess that the recordings they produced over the next seven days would change the lives of many people, themselves included, and would forever change the standing of Cuban music in the world.

The studio, owned by Cuba’s national label EGREM, was originally installed in the 1940s and its large wood-paneled room enabled recording to take place with the full ensemble playing live, which puts the listener right in the room amongst the musicians.

Few could have predicted what a worldwide phenomenon those recordings would become, selling eight million copies and winning a Grammy in 1997, elevating artists like Ibrahim Ferrer, Rubén González and Omara Portuondo – as well as Ochoa and Segundo – to superstar status half a century after the peak of their original popularity.

Produced by Ry Cooder for World Circuit, the new edition includes several tracks that were recorded during that famous week in 1996 but never released; some intended as repertoire suggestions, some off-the-cuff improvisations and some fully formed gems that are the equal of anything on the original album. There are also alternate takes of some of the now famous and most well-loved songs from the album.

Eliades Ochoa says: “Buena Vista Social Club brought together great musicians from the golden age of Cuban music and successfully took our traditional music to the rest of the world. It allowed me to be recognized internationally by the sones, guarachas and boleros I had been doing since I was young. It also made me reconnect with musicians with great experiences whom I admired.

“Buena Vista brought us together through music, and we were a well-run family. On this 25th anniversary, we will remember with deserved pride those great legends who will always be present among us. We will celebrate with joy the legacy of the Buena Vista Social Club and the traditional Cuban music.”

Producer and guitarist Ry Cooder says, “The Buena Vista boys fly high and never lose a feather. If you miss the boat this time, you’ll have the blues forever.” Nick Gold adds: “Buena Vista Social Club is a once in a lifetime recording of Cuban music at its transcendental best. The magic created in that Havana studio sounds as vital and beautiful today as it did 25 years ago.”

All words by Tim Cooper. You can find more of Tim’s writing on Louder Than War at his author’s archive. He is also on Twitter as @TimCooperES with an extensive archive of journalism at Muck Rack.