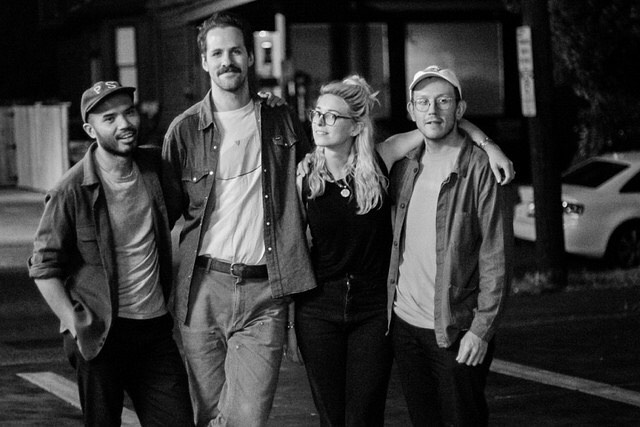 Ever since the early 90s, Seattle has established a name for itself as a hub of exciting new music – a stamp that the city carries to this day. Proving that there is something to this statement, the ever-great alternative rock outfit Darto have announced their new Fundamental Slime EP, which will be released via Aagoo Records in various formats, including 12″ vinyl and CD.

Today we have the pleasure of introducing you to the new single from this four-piece, which consists of Gordon De Los Santos, Gregory Flores, Candace Harter and Nicholas Merz. Titled Brotherhood, this track has a motorik feel to it with a pulse and synths evolving from sparse to thick, the odd saxophonic screech here and there in the most intense moments, with Merz’s deep and captivating lyrics keeping you on the road for an intense cinematic trip – this journey – with the band.

This and the EP as a whole ought to appeal to fans of David Bowie, Mark Lanegan, Broadcast, Wand, Neu and Father John Misty. Aagoo Records consistently releases good music, and this current EP upholds that high standard.

This is far from the band’s virgin release, having formed in 2010. ‘Fundamental Slime’ is the follow up to Darto’s critically acclaimed record Human Giving and the Hush/Follow Up 7” by Darto & WAND, both of which were released in 2017.

The band self-recorded these four tracks in mid-April, passing it off for mixing by capable hands. Steve Fisk is actually among the best in the region, his work including albums by Screaming Trees, Nirvana, Soundgarden, Low, and even Britain’s The Wedding Present. This EP was also mastered by April Golden (Soundgarden, Car Seat Headrest, Goat, Rob Zombie). Good stuff!

Darto’s Greg Flores explains, “Brotherhood is about power and dominance. Men in particular seem to protect their power with violence without ever questioning the reasons why they feel the need to protect power in the first place. The irony is that violent dominance is an ultimate display of weakness, and it’s a way to express insecurity while still maintaining power”.

“These songs share a similar theme of power and control, and speak from a variety of perspectives. We all sat down and co-wrote most of the lyrics together, each of us taking the lead on a different song. I really liked that process because it allowed for instant feedback and there were 3 other people helping me with putting ideas into words. I think this record touches on the shadow of what is happening in this world and how people are being mistreated. Overall, it’s just a record about misuse of power,” says Candace Harter.

Fundamental Slime is an observation on the darker end of the human-possibility spectrum. Ego, power, and nihilism are dissected from the viewpoint of various individuals struggling to dominate or be dominated. Where the lyrics give voice, the sounds give flesh.

Continuing to broaden the scope of instrumentation allowed Darto to wander into new territory on this album. Working with saxophonist Neil Welch of groundbreaking Seattle jazz duo Bad Luck, the massively varied sonic qualities of the performance by a genius gave each song its own body – startling, confusing, soothing, airy, void, distant, deplorable, and beautiful.

Human Giving can now be ordered in physical format from Aagoo Records’ website and digitally via Darto’s Bandcamp page.

Catch their latest video No Self here