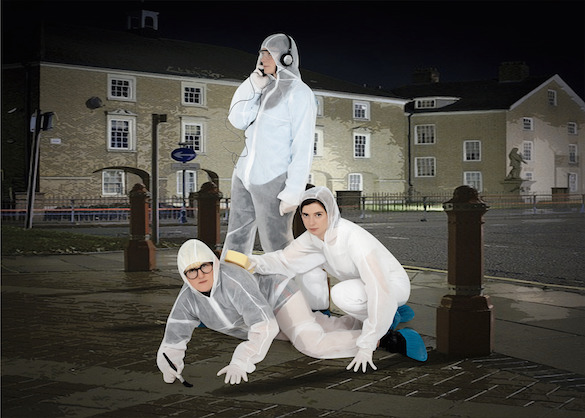 London based post-punk trio Ravioli Me Away have a new album out in August on Good Job Records. We think it’s great but not exactly easy to pin point as regards it’s musical references. To that end then, when we were offered a playlist by the band to share with you, we jumped on it.

Older readers will remember the band Stump, firm favourites of the legend who was John Peel. It was they who first came to mind when I started listening to Ravioli Me Away. The fact that they talk about fish and use xylophone’s did nothing to dispel that, although as I carried on listening to their music I began doubting myself and started thinking RMA were pretty original – not unlike Stump in fact!

How do the band describe themselves you ask?

“Vintage drag queen Bananarama YouTube footage played with twice the sass and in double time with an incredulous broadband connection reflected in the eyes of a much overworked and downright exhausted Julie Burchill on acid”.

The band include Sian who used to be in Plug & runs Power Lunches, and also Rose who sometimes plays with Shopping. Lyrically their songs are full of “social realism soaked through with a heady dose of fantasy” and “idiosyncratic poetics”.

The playlist is full of genius tracks – lots regular Louder Than War will adore. For a start it’s bookended by Swans and Psychic TV and includes John Peel session tracks and bands you probably won’t have heard of. Which is pretty perfect eh? and it certainly helps us as regards our desire to find out what makes them tick.

Ravioli Me Away also have a whole host of live dates coming up which you an find below the playlist below (or on YT here if you’re on a mobile phone) and a full album review will follow. Also below is a video for the track Cat Call by RMA.

You can find Ravioli Me Away online here: raviolimeaway.co.uk. They’re also on Facebook and they tweet as @RavioliMeAway.