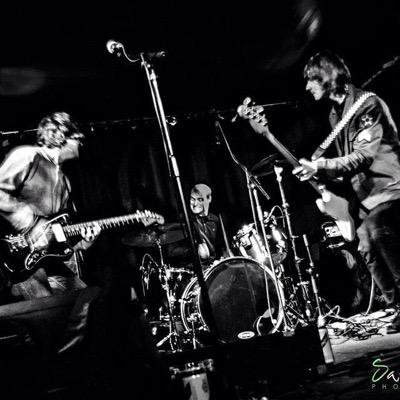 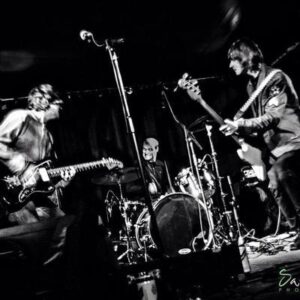 Psych-rock three piece Deja Vega are back on the scene with two blistering new tracks – Pentagrams and Skeletons in the Florist. LTW editor Sarah Lay gives us the low down.

Rising from the ashes of Louder Than War Records signings Deadbeat Echoes, Deja Vega have been away for a little while brewing up this brand of thrashing rock, bug-eyed and heavy psychedelia.

Bursting back with two tracks – Pentagrams and Skeletons in the Florist – the band build on their emerging style of a band whipping up a whirl of influences from across the years to create a maelstrom of sound, a frenzied yet spun out take on guitar-led rock.

Skeletons in the Florist is three and a half minutes of tripping beats and swirling vocals. It’s the distant sound of blue lights wailing in the night as you lie star-shaped and dry-eyed from staring in panic at the walls closing in around you. Paranoid and sinister this track is the throbbing mess after the good times have been rolling.

It’s hard to tell, for a moment, whether the hammering is your heart beat fervently trying to break through your ribcage, or if it is the chaos of drums on Deja Vega’s new track Pentagrams now somehow inside as well as around you.

In the video a figure in a shiny Burtons for Men suit and a ping-pong ball blank face breaks out stilted dance moves in the dark of a deserted country lane. The slow movement of the video against the racing of the track is ominous, the final frenzy before something that has you absolutely in its grasp does what it will with you.

These two new tracks are from a band that are taking their time to develop their sound, to learn their craft, only to loom casting their dark rock n roll shadow over you. As John Robb said, this is a band that is beyond, and that’s the sort of psych-rock meltdown worthy of your ears.

Catch Deja Vega live at Gullivers in Manchester on 28 November and TS One in Middlesborough on 6 December. Find them online on Twitter and on Facebook.

All words by Sarah Lay. Sarah is editor at Louder Than War and you can find her on Twitter or read her other articles on the site here.