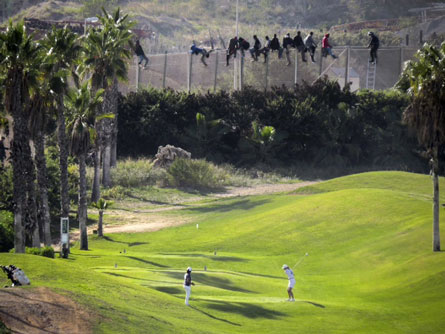 Singer/Songwriter and multi-instrumentalist Trevor Perfect is set to release a wonderful and powerful new single under his Red Eye moniker.

Moroccan Fruit is a stirring jazz-inflected song that addresses the current refugee crisis and our response to it. Inspired by Nina Simone’s version of ‘Strange Fruit’ Red Eye’s Trevor Perfect wondered what issues the singer would be singing about now. When he then saw the haunting photo by Jose Palazon (which he has used as the single’s cover), of the migrants’ rights group Pro De In he was immediately inspired by the combination (Moroccan immigrants in Melilla, Spain, hanging onto a fence at a golf course at a border as golfers played on), linked the two together and wrote the song. As Trevor explains:

The lyrics “golfers play on, take no notice. It’s just a game”, describes a cold indifference to the situation and the refugees’ plight – something we must all guard against, and maintain empathy for all human beings. As Owen Jones said, “As humans, we have a huge potential capacity for empathy; but when we dehumanise a group of people, we can accept (or indeed inflict) cruelty.”

There is a danger that we are drifting into dehumanising refugees. When a boat carrying refugees sinks, despite scores or even hundreds dying (often children), the story slips further down the news agenda as it becomes a more regular occurrence.

The song seeks to emphasise that the refugees are people, flesh and blood, parents and children. This was the similarity and empathy that I sought to achieve when the song depicts a son telling his mother of the dead refugee on a beach in a picture, and wanting to “Play that game…”. There must be many mothers who saw the tragic photos of the young refugee dead on the beach and were touched by the similarities with their own child.

Many parents in the West are willing to sell their house and move away from friends and family just to find a better school for their children – “to give them a better chance in life”. Imagine that drive and desire to do the best for your children when war and destruction is all around, and death is a real prospect.

The final words are from Patti Smith: “You can’t carve up the world, It’s not a pie”.