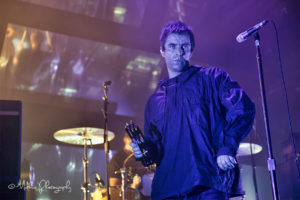 Also reveals tracklisting for debut solo album ‘As You Were’

Liam continues to build anticipation for the October 6th release of his debut solo album ‘As You Were’ by sharing the brand new track ‘Chinatown’ and revealing the album’s tracklisting.

In contrast to the punchy first single ‘Wall Of Glass’, ‘Chinatown’ is an atmospheric psychedelic slowburner in which Liam utilises the more tender side of his inimitable vocal stylings. As a pairing, the two tracks hint at what to expect from ‘As You Were’ with Liam adding a modern sheen to his passion for a wide-range of influences from the 60s and 70s.

After Liam ignited the writing process with the heavy duty soul-rock of ‘Bold’, ‘As You Were’ was recorded in two locations. Greg Kurstin performed all of the instruments on the four songs that he produced (‘Wall Of Glass’, ‘Paper Crown’, ‘Come Back To Me’ and the psychedelic whoosh of ‘It Doesn’t Have To Be That Way’), while Dan Grech-Marguerat produced the remainder of the album at Snap! Studios in London.

“I didn’t want to be reinventing anything or going off on a space jazz odyssey,” says Liam. “It’s the Lennon ‘Cold Turkey’ vibe, The Stones, the classics. But done my way, now.”

One of the most striking aspects of ‘As You Were’ is that all the songs have a purpose. There’s no flab, nothing to cut. They all feel directed at something or someone, setting the record straight or getting his side of the story over, be that the swinging, Bo Diddley-like ‘Greedy Soul’, which incinerates someone who’s the “ungrateful dead” or the mega-ballad ‘For What It’s Worth’ which serves up the album’s biggest chorus.

The tracklisting for ‘As You Were’ is:

Bonus tracks on deluxe editions of the album

The ‘As You Were’ cover features an iconic new portrait of Liam which was taken by the influential photographer, fashion designer and creative director Hedi Slimane.

A special boxset is also available from https://wbr.ec/lg-store-dlxboxset. It compiles a coloured 12” vinyl of the album, an exclusive 7” format of ‘For What It’s Worth’, a print designed by Klaus Voorman (the artist behind The Beatles’ ‘Revolver’ album cover) and additional collectors’ items.