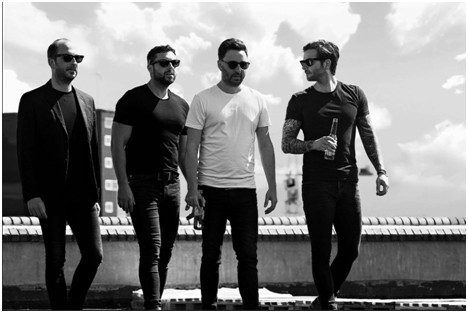 Living miles apart from each other whilst juggling parental duties, MASK are a band who reflect what it means to be a rock band in the real world. Deliberately avoiding studio trickery, auto-tune and generic fakery, they are genuine friends delivering their tracks in a couple of takes with vintage equipment with the sole purpose of entertaining their audience. If this clashes with the preconception of the modern rock band, then this is only the beginning of their boundary-breaking, with their highly anticipated live appearance giving all proceeds to charity.

MASK are led by H (guitar/vocals) who is based in Belfast, along with childhood friends Daz (bass) and Craig (guitar/vocals), the band are spread across Northern Ireland, England and Scotland – in fact, with well over 1100 miles between their locations, it would be far easier to have given up years ago. MASK are the antithesis of your typical rock stars – they describe themselves as unapologetically uncool; they’re all working dads; they’re releasing their first album twelve years after starting out, only creating their best material at a time where life is throwing everything in their paths to make it all but impossible.

Despite all this, MASK have succeeded in creating a unity and an energy which many more established bands can only dream of. Their time playing together is precious and the furious energy produced when they meet is tangible on their tracks. Coupled with their use of vintage 60’s and 70’s equipment, MASK are bringing truth and passion back to rock music, proving that though life can often threaten to get in the way, the ability to create real music is always there.

Following on from “The Truth”, their debut EP released in 2017, “The Famous” is a marauding beast of an album. Abandoning plans for vast orchestras and gospel choirs, the decision was made to go back to basics, allowing the tracks to develop naturally rather than to produce something contrived or generic. With lyrics which range from profound to acerbically comic, MASK are the antidote to rock by numbers and will release Celebrity, the first single from the album, on August 31st.