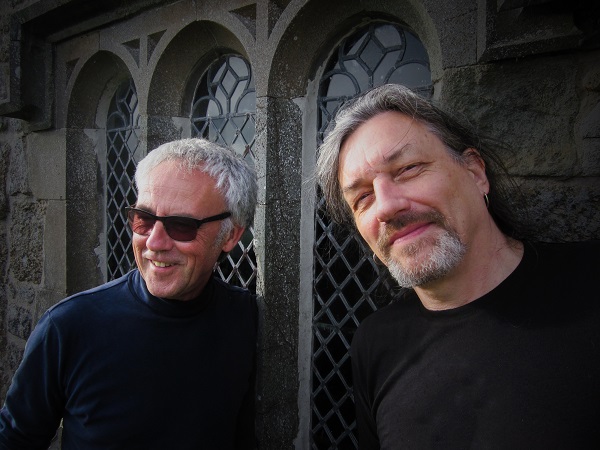 Today Louder Than War is pleased to present you the latest output from Noctorum, which is a duo comprised of guitarist/singer-songwriter Marty Willson-Piper and producer Dare Mason. More specifically, we are premiering ‘The Moon Drips’, the new single off their fourth album ‘The Afterlife’. Their first long-play in seven years, on February 15, it will finally be released on heavy-weight gatefold vinyl, CD and digitally via Schoolkids Records, a label with roots in North Carolina but has also recently expanded to Ireland.

‘The Moon Drips’ is the album’s opening track and a striking one it is. It tells the tale of a perilous journey on a mysterious caravan that takes the unwitting across the Texan-Mexican border to a geographically impossible jump, landing in Bohemia and Prussia. As these two worlds collide, winds howl, trumpets blast, violins yearn and 19th century sequencers outmode harpsichords as creatures of the night fly silhouetted against the glowing disc of the moon, a backdrop for realised shadows as they pounce on reality itself.

Earlier, PledgeMusic contributors got their advance copy after Noctorum’s campaign successfully achieved 113% of its target for this album. The new track comes on the trail of singles ‘Piccadilly Circus in the Rain’ and first single ‘A Girl With No Love’.

Everything we’ve heard from the new Noctorum album gives every indication that this is a smashing album and that Marty Willson-Piper is still at his pinnacle as far songwriting and performance goes. He’s also found a beautiful tandem with Olivia Willson-Piper on backing vocals (and electric violin). Here we also find Dare Mason’s production up to par with his past works for The Church, Placebo, The Grid, Brix Smith (ex The Fall) and Cinerama.

After forming in 2002, Noctorum released their debut album ‘Sparks Lane’ on Heyday Records in 2003, followed by their 2006 album ‘Offer The Light’ on that same label, later re-releasing it as a digipak in 2010 via Second Motion Records. Heyday released their third album ‘Honey Mink Forever’ in 2011.

Named for the village Noctorum, located near to their childhood homes on The Wirral, Dare and Marty liked its association with night and its Latin derivation. This collaboration has an eclectic focus, making the quiet loud and vice-versa, singing words that might be spoken and playing indoor instruments that should be heard outside. It has to be imagined to exist.

“Perhaps city-living is by definition a difficult slog – high rents, a constant pressure to earn, an uphill battle that traps you in a vicious circle that has you so focused on the job of survival that your aspirations, your dreams, are swept aside, pushed out of reach as all your waking hours are spent treading water, your imagination drowning, your ideas lost in the rush hour,” says Marty Willson-Piper.

Marty Willson-Piper is best known as a long-time member of Australian psychedelic rock band The Church, who he was with from its inception through to 2013. He joined All About Eve in the ’90s, releasing two studio albums and several live albums with them. He is also lead singer and lyricist with Swedish band MOAT and a touring member of Swedish Prog legends Anekdoten. Since the mid-1980s, Willson-Piper has maintained a steady solo output, releasing six solo studio albums and three live solo albums to date. He has also co-written music with many artists, including Grace Slick, Aimee Mann, Susannah Hoffs and Linda Perry.

As a house engineer at London’s world famous Townhouse Studios, Dare Mason has worked with the likes of Prince, Paul McCartney, Boy George, Tina Turner, Ravi Shankar and Soul II Soul, among others. After becoming a freelance producer/engineer in 1991, he produced albums for The Grid, The Church, Placebo and AC Acoustics, working in London, New York, Sydney and Stockholm. He finally moved to Cornwall, where he set up the VIP Lounge studio in 2001. Nowadays, Dare is mainly known as a mixing engineer, having mixed recordings by Brix Smith (ex The Fall), Cinerama and Tommy Tokyo. Dare is also a composer, songwriter and accomplished guitarist, singer and dabbler in keyboards, usually contributing musically to the artists he produces.

‘The Afterlife’ album will be released on February 15 and streamed via Spotify. It can be pre-ordered in all formats via Schoolkids Records . Marty Willson-Piper will kick off his UK tour with Olivia Willson-Piper on March 14 in London. Tour dates can be found below and tickets may be obtained here.

LYRICS
In the night
The moon drips inside
And the light fails in my eyes
I reach you, I taste you
Lie awake
To the cold thrill of your face
And the scars’ tips that you trace
The dawn hides you, the mist binds you
Bleak lands and sombre sands
Black ice that weaves and dies
Opaque he turns away

Also enjoy the first two singles off this album: