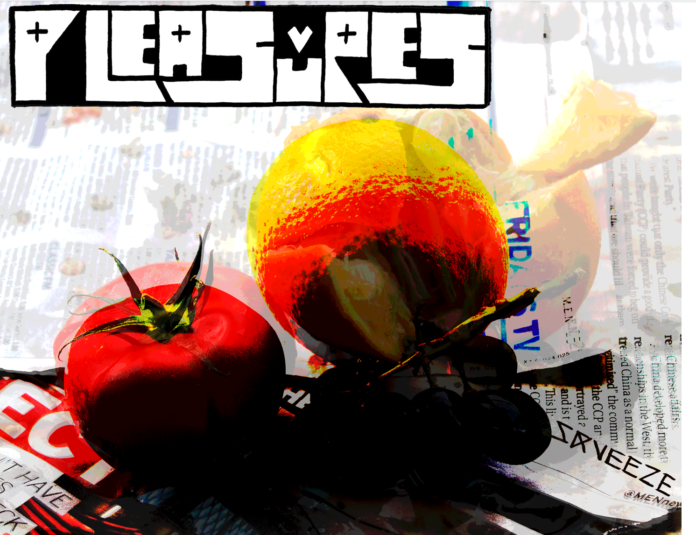 We’ve been tracking Pleasures for some time now.

Seen them live a couple of times and enjoyed their dislocated collapsing grooves thoroughly. Their new song captures their glorious eccentric pop wonk like XTC hanging out with Gorillaz perfectly and the band are on the edge of bigger things.

Can manchester contain such effervescent brilliance?

Last time we saw them live we said this…”the kind of exuberant and dishevelled musical wonk that is so compelling.”  (Louder than War)
They say
‘Squeeze’ is a post-lockdown musical treat from genre-bending Manchester 5-piece Pleasures, whose influences span funk, rock, disco, jazz and punk ~ from XTC to Parliament with a splash of Gorillaz.
Recorded at Dead Basic Studios in Manchester’s Northern Quarter, ‘Squeeze’ was produced by Lewis Brookes and is described by Pleasures frontman Sonny Baker Royle as ‘the mutant daughter of punk and jazz with a latin groove’. Sonny and fellow band members Miles Pillinger, Alec Waters, Barney Anderson and Casey Bell, are all multi-instrumentalists who met at Chorlton High School in Manchester, having been in various bands since the age of 12.
The band used their lockdown time wisely, experimenting with new styles of writing. In September they spent a week self-isolating in a musical bubble on a farm in rural Devon, which just happened to have its own recording studio! In exchange for recording time, they slung on their wellies and mucked in with some cattle-herding!
Prior to the lockdown, Pleasures were curating their own Frank New Wave events at Aatma, Manchester. These busy music and art ‘happenings’ featured Pleasures themselves, along with associated artists, sculptors, DJs and bands – who were all invited to perform and display their art.
The band members were also putting on a weekly Jam Night at The Edge in Chorlton, where anyone could turn up with a musical instrument and join in or sit back and enjoy listening to the music with a beer!
Pleasures are planning to perform live again in 2021 ~ as well as putting out some streamed performances.
‘Squeeze’ will be available from this Friday 11 December: https://soundcloud.app.goo.gl/WF554drUCco8fUYA9
Website: Pleasures
Facebook: Pleasures
Spotify: Pleasures
Instagram: Pleasurres