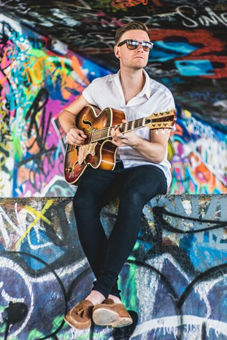 London-based multi-instrumentalist Craig Stuart strikes out on his own with debut single Like A Rocket.

A true musician and modern-day troubadour, Craig Stuart is a London-based singer-songwriter, guitarist and percussionist. Tallying up nearly 150 flights in the past three years thanks to traveling the world armed with little but his guitar, Stuart is both a well-travelled and well experienced musician that’s been an integral part of the London Underground Busking scheme for several years.

Having previously been the sole songwriter in a band, Craig Stuart has since channeled his numerous musical talents into his latest venture as a solo artist, something which has allowed him to explore his more emotional side, in well-crafted heart-wrenching and melancholic songs.

Now ready to make his debut as a solo artist, ‘Like A Rocket’ marks the first taste of Stuart’s solo material, ahead of the release of his debut EP. Craig Stuart’s clean and sweetly delicate vocals shine atop a concoction of guitar and piano melodies paired with synthesizer harmonies that are driven by subtle, intricate percussion rhythms, something exhibited perectly on Like A Rocket.

Speaking on his debut track Craig Stuart explains, “The song is actually a personal song about a non-romantic relationship funnily enough, but that similar to a toxic relationship with someone you cared about a lot, but you feel like they are holding you back, because ultimately they want different things to you.”