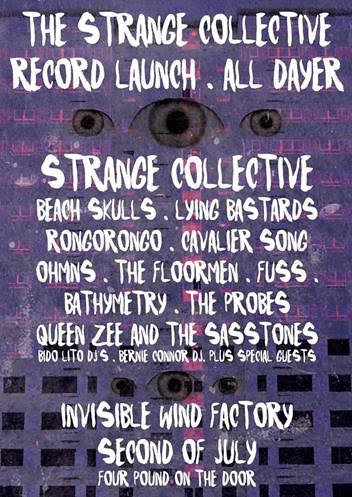 Liverpool-based Strange Collective stream their debut EP Super Touchy in full ahead of its launch party this weekend.

Ahead of both its July 1st release, and its July 2nd launch party, Liverpool garage-psych quartet Strange Collective are premiering their Super Touchy EP in its entirety exclusively with Louder Than War. Having only existed as a live band until now, Super Touchy is also the band’s debut release, and what better way to celebrate than with an all day party.

Joining Strange Collective will be an influx of local talent including Ohmns / Psycho Comedy / Beach Skulls / FUSS / The Floormen / Rongorongo / Lying Bastards / Cavalier Song / Bathymetry / The Probes / SANKOFA and Queen Zee and the Sasstones, as well as BBQ, food stalls and DJ.

With support slots already under their belt from the likes of Ghost of the Sabre Tooth Tiger, Black Lips and King Khan and The Shrines as well as festival appearances at annual institutions such as  Liverpool Psych Fest, Liverpool Music Week and Sound City, it’s clear that Strange Collective are already on to a winner.

You can stream Super Touchy below, and for more information on  the release party you can check out the Facebook event.