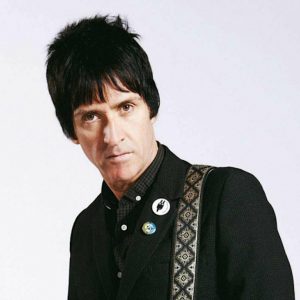 EACH WILL RECEIVE A FREE ‘SPIRAL CITIES’ 7”

“This third solo album widens his palette, both in its more nuanced music and subject matter.” 4* – Q

“Call the Comet is a terrific album in its own right. In context, it’s a triumph.” 4* – The Guardian

“This is a record steeped in both the chilly yearning of Bowie’s “Berlin” albums and Ziggy Stardust’s glam apocalypse, as well as the science-fiction paperbacks by the likes of JG Ballard which inspired them.” 4* – The Independent

Set to commence an almost sold-out UK tour in Brighton tonight, Johnny Marrwill follow his sold-out London show at the Roundhouse with an intimate date at the new EartH venue in Hackney on December 9th. 100 tickets are now available for the show instore at Rough Trade East, and every buyer will receive a free copy of his new 7” single ‘Spiral Cities’.

There will also be a number of opportunities to win tickets which will be announced on Johnny’s socials in the near future.

In keeping with the themes that permeate throughout his recent Top 10 album ‘Call The Comet’, ‘Spiral Cities’ finds Marr addressing ideas of how alternative societies and urban centres could look in the future. It was particularly inspired by the ‘Crystal Chain Letters’, which Marr describes as “a book by different architects in the early 20th century, writing and conceptualizing the utopian city of the future.”

Released on 7” vinyl, ‘Spiral Cities’ is backed by the new b-side ‘Spectral Eyes’.

‘Call The Comet’ has been a triumph, earning both the strongest reviews and highest chart position of Marr’s three solo sets to date.

Johnny Marr played two intimate UK gigs around the launch of ‘Call The Comet’. The Guardian’s review of his Islington Assembly Hall show concluded that it was“a night that finds Marr elevated to a symbol of alt-rock righteousness.” At the Brudenell in Leeds, Louder Than War witnessed “a sweatshod celebration of a decades long quest of guitar pop brilliance.”

He’ll follow the current UK dates by touring Europe through to early December. The dates are: