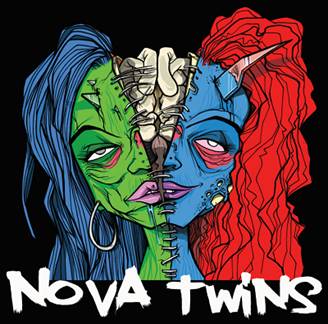 The hotly tipped urban punk duo Nova Twins continue to shake up the underground with the release of their debut self-titled EP, which is streaming exclusively today on Dork.
The band, who we have been raving about on LTW since seeing them play last February in Hastings release their debut on Friday 19th th, It’s a thrilling distillation of the duo’s  punky grimey party.
Listen here: https://soundcloud.com/novatwins/sets/mutant-ep/s-VwV5O

Purchase link: https://novatwins.lnk.to/novatwinsep
https://novatwins.com
https://soundcloud.com/novatwins
https://facebook.com/ NovaTwinsMusic
https://twitter.com/NovaTwinsMusic
https://instagram.com/NovaTwinsMusic
Amy Love and Georgia South from South East London have been taking the underground scene by storm with their hard rocking, genre hopping sound – a combination of the driving anger of punk and grime but with a hard bass driven centre. The deadly duo has spent the last two years blowing speakers across the country and has already pricked the ears of the likes of Alex Baker at Kerrang! Radio, The Quietus – who named them in their top five bands at The Great Escape – BBC 6Music’s Tom Robinson, AFROPUNK, BBC Introducing, Right Chord Music and legendary counterculture brands Dr Martens and Underground Shoes.
Setting the tone for what’s to come, opening track ‘Hitlist’ has an undeniable lyrical snarl set over an aggressive half-time beat and a slab of distorted bass and guitar reminiscent of Rage Against The Machine. The animalistic ‘Drums’ is a primitive urban punk track, whilst the catchy ‘Bassline Bitch’ – with its’ deep, hooky bass riff – hits immediately with the pounding drums and the scowl and scat of the sharp-tongued vocals. From the infectious groove of ‘Twitch’ to the heavier feel of ‘Wave’, the EP is a powerful onslaught of sonic attacks and is an example of the explosive and raw effect the duo can achieve when mixing up a stew of futuristic riffs and ‘cut like a knife’ vocals.
Their punishing sound and energetic live shows have seen them captivate audiences and industry professionals across the country, and with an acclaimed performance at this year’s The Great Escape Festival as well as shows at Birthday’s, The Old Blue Last, Boomtown Festival, Standon Calling and The Monarch Camden, the Nova Twins are fast becoming household names in the alternative scene.
Set to be the underground release of the summer ‘Nova Twins’ is a gripping, anarchic body of work that epitomises the duo’s rebellious punk attitude. The urban punk scene is about to be twisted out of form.