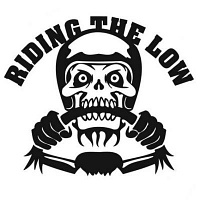 Riding the Low have released a new track, Sally Street Team, on YouTube as a preview to their forthcoming album Riding the Low Are Here to Help the Neighbourhood.

Fronted by Paddy Considine the band have just supported The Charlatans on some dates of their winter UK tour.

The album will be the first new material since the release of What Happened to the Get to Know Ya? in 2013.

Reviewing the recent The Charlatans tour date at Nottingham Rock City Louder Than War’s Sarah Lay said of Riding the Low: “If you’ve heard of Riding the Low before there’ll be two things you already know: they are fronted by Paddy Considine and that these songs are imbued with his love of Guided by Voices. But write them off as an actor’s vanity side project and you’re missing out on some worthy rock n roll.

“They are a band with a knack for a catchy riff that in less skilled hands could slip into mundane DadRock territory, whose lyrics are about the that often overlooked but nevertheless deep everyday love between friends, and whose standard rock swagger packs a few surprise punches.

“These are understated but uplifting indie anthems, solid melodies with down-to-earth but intelligently expressed lyrics; songs to throw your arms around your best pal and slur ‘love you, duck’.”

Sally Street Team builds on this, screeching guitars that rage in the background racing against a laid-back vocal. There is a physicality to the song which is all about the blood pumping, the nerves fraying around the edges with flight and flirtation instincts. It’s a sub-three minute rough and ready track that bodes well for an album of honest and earthy rock and roll.