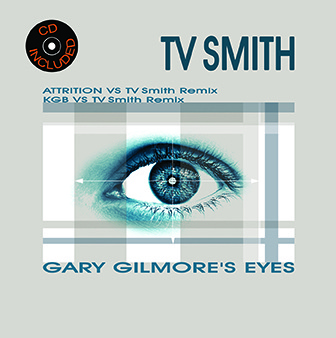 “Wow, that’s pretty fuckin’ cool Martin – I love it! The punks will probably hate it and I don’t care! That’s been worth waiting for, very happy about it.”
TV Smith

4 track re-recording of the punk classic, a collaboration between ATTRITION and TV SMITH,
on vinyl/CD package and download from our official bandcamp store.

With a bonus fifth download mix only available through us….

Martin from Attrition tells us…

‘1977. A year that changed everything for me.
I remember seeing the Advert’s performing Gary Gilmore’s eyes on Top of the Pops.
Loved TV Smith’s song writing. I still do. He’s been more than a little influence on me.
23 years later and a chance meeting between us online and i was helping arrange a show in Coventry for a now solo TV Smith.
We started recording a collaborative version of Gary Gilmore’s eyes in my studio. It wasn’t the right time for me and the project lay shelved for 14 years…

Until another chance meeting online between me and our old Antler records label boss Roland Beelen. We talked music as we never had the chance to back in the late 80’s when ATTRITION were signed to Antler. We shared a love for the Adverts and i mentioned this long forgotten project.
Now lying in state on obsolete hardware somewhere at the back of The Cage Studios storage.
It had to be completed. and it has. finally. and we both love it. and Roland and KGB have created some fine reworkings for this release.

The original re-recording recorded and mixed by Martin Bowes, at The Cage Studios, Coventry, England. 2000 and 2014.

KGB remixes made at Atomic studios. Belgium. 2014
A Tracks and Traces release.