Home Blogs LISTEN! fan of drone rock? or weird and ambient industrial – then... 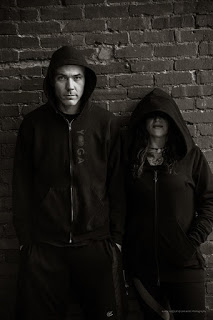 Black Yoga are a yoga school in Pittsburg who teach the ancient art with a background of dark, droning and mystical music from Godspeed to Sunn O))) to far more underground drones and industrial, dark and strange musics.

BLACK YO)))GA is vinyasa style yoga set to drone, noise, stoner metal, ambient, industrial, space doom, and other traditional meditation music. It incorporates basic poses in a relaxed environment, while focusing on safe body mechanics. It’s a traditional yoga class in practice, however darker than what you may typically associate with the practice.

This is Black Yoga, a take on the ancient Indian practice for those who “get bored with the sound of birds and waterfalls,” says Kimee, who concocted the class with her husband Scott (vocalist of a thrash band called Storm King). The room is dark, the new-age talk kept to a minimum, and the soundtrack a mix of trip-hop, industrial rock and doom metal.

The music is so great that they have out up several of their music mixes on Mixcloud and they are a great guide to the form.