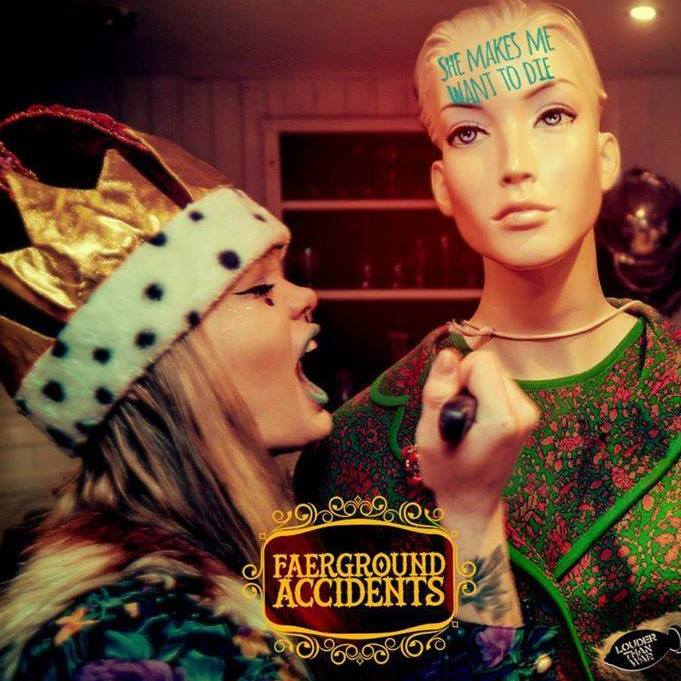 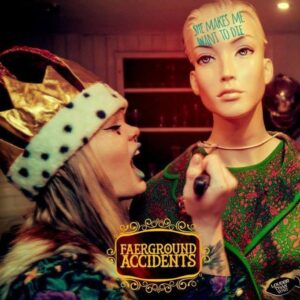 The band, whose debut single was a near hit and was played all over 6music and received great press are poised for a breakthrough and the new single is a perfect slice of anthemic, poetic, heartbreak bedsit pop with thrilling guitars and a perfect melodic swagger that is a welcome slice of androgynous glam in a tame indie world.

The download link for the single will be ready next week….in the mean time watch the fab video…

‘She Makes Me Want to Die’ is the story of a relationship breaking up, but in place of bleak reflection the track is driven by kinetic, agressive and infectious energy.

This is a tale of explosive arguments at 3am, of being pushed almost to the brink by the pervasive toxicity of the situation – but juxtaposing this unhappy subject matter, Faerground Accidents have produced a wonderfully upbeat early Brit Pop style classic with echoes of Suede and Pulp, underpinned by the influences of Bowie and Soft Cell.

With style, wit and vigour, Faerground Accidents exploded onto the UK’s music scene in late 2014 when their double A side single ‘We Hate the Same Things/Back in Town’ was enthusiastically championed by BBC 6 Music’s Marc Riley and Steve Lamacq, Absolute Radio’s Frank Skinner and Amazing Radio’s Shell Zenner and Charlie Ashcroft amongst many others. This attention led to the band supporting the hotly tipped Sleaford Mods at Sheffield Academy as well as playing with legendary punk outfit The Membranes in London.

Originally formed in Manchester in 2012, the band’s demos caught the attention of Louder Than War Records’ founder John Robb who described them as “stunningly original and beautifully odd” adding “if this band are not massive by summer then you’re all deaf!” Captivated by frontman Bomar Faery, John Robb summed him up as being “borderline psychotic and quite definitely genius!” However, less than 48 hours later, Bomar was admitted to a psychiatric facility and the band’s future looked uncertain.

Following his release, Bomar returned to Sheffield and set about reforming the band with Artery’s Marray Fenton, Loveboat’s Dan Botterill, Dodgem’s drummer Michael Breeze and original Manchester based member, Henrietta Rowlatt on keyboards. Now signed to Louder Than War Records, Faeground Accidents are one of this year’s most vibrant and exciting prospects.